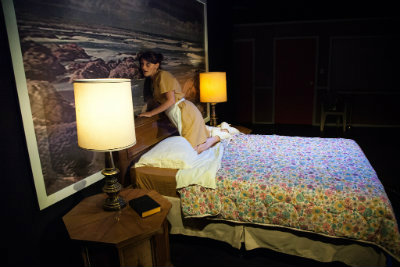 BOTTOM LINE: A talented cast and versatile set add much to a surreal and fragmented script centered on a mismatched group of hotel guests attempting to exorcise their demons.

At the center of the Summer Works 2012 play Motel Cherry is Norman Bates-esque Albert (expertly embodied by Steven Boyer), the creepy caretaker of a run-down motel owned by his mother, who has at least one restraining order against him stemming from his stalkerish tendencies. He spends his days hounding attractive female guests to whom he offers containers of Cup-A-Soup and the occasional discount. Among the weary travelers seeking solace at the motel are: a troubled high school girl (Eboni Booth); Mrs. Johnson (Linda Marie Larson), who travels with a menagerie of animals that may or may not actually exist; a reverend (Joseph Allain) and his sexually frustrated wife (Francis Benhamou); a waitress in an abusive relationship (Boo Killebrew); two recovering alcoholics in a problematic relationship (DJ Mendel and Monique Vukovic); and a lonely man looking to lose himself in the pleasure of pay-per-view porn and McDonald’s french fries (Mike Shapiro).

Apparently, Motel Cherry is so remote that no one’s cell phone has reception, and it certainly seems to be somewhere off the grid, removed from the confines of reality. In David Lynch-esque surrealness, the night’s guests of the motel confront their inner demons and desires, be it dreaming of a romantic Hawaii vacation with a human-like horse, speaking to a giant buzzing aqua marine butterfly, being instructed on masturbating by a strange Russian woman, finding a giant red butterfly sitting on your nose in light of coping with an abusive relationship, or being told by an ominous voice and flashing vacuum cleaner that you are in fact destined to be a king.

Regardless of one’s own interpretation of the events that unfold on the HERE stage, the work certainly proves to be both attention grabbing and memorable. The fact that the work delves so far outside of reality and focuses on so many multiple storylines and characters gives it a fragmented feel with limited character development. Nevertheless, there is plenty to admire here: a highly versatile set that sets a foreboding tone, an immensely talented cast, a sometimes humorous script, and excellent staging by Meghan Finn. Greater development scriptwise, however, could have strengthened the power of this work.