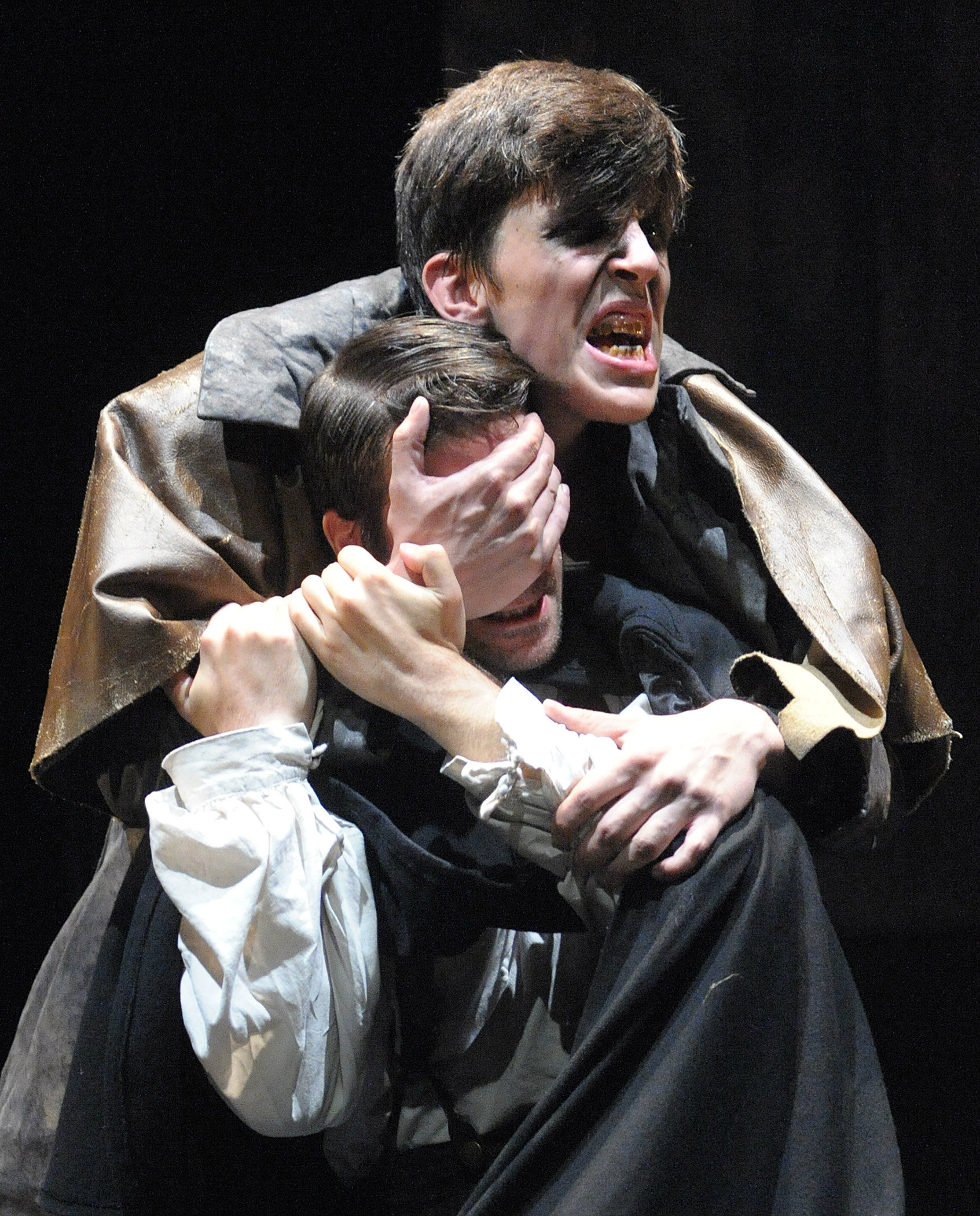 BOTTOM LINE: This adaptation of Shelley’s Frankenstein attempts to shed a new light on the familiar story, but gets lost in the land of cliches.

Mary Shelley's Frankenstein has enthralled audiences ever since it was first published in 1818. Since it's appearance on bookshelves the story has undergone a series of facelifts and alterations, but it has never disappeared from cultural memory. Neal Bell's Monster is the latest incarnation of the famous novel, which opened this week as part of the Potomac Theatre Project's annual summer presentation in New York City. The story is still the familiar tale of the hubristic doctor who plays God and reanimates a corpse; however do not expect to see the green man with a flat-top and bolts protruding from his neck. Mr. Bell's adaptation explores the curious upbringing of Dr. Frankenstein and expands upon the seldom discussed sexual anxieties in Shelley's novel. On paper the concept sounds fresh and exciting — an attempt to breathe new life into a familiar story and scream "It's alive!" Regrettably, Bell's adaptation does not deliver on this promise. What is intended to be a bold retelling of a classic robs Shelley's original story of its thrill and excitement, and proves to be the same tale rendered even more implausible and laden with clichés.

The play does not start on a platitudinous "dark and stormy night," but out on an icebreaker making its way for the North Pole when the captain (Christo Grabowski) notices a man on the ice. The ship's captain curiously departs his vessel and approaches the man, Victor Frankenstein (Joe Varca), who recaps his life story while the ship becomes ice-locked. Frankenstein begins his tale with his unusual childhood and details his early scientific experiments leading up to his most infamous creation, and the dreadful aftermath that led him to this icy wilderness. Enraptured by Frankenstein's history, the captain sacrifices his crew in hopes of bringing them (to quote Mr. Bell) “a ‘once upon a time’” story. One could argue that the captain parallels the mad doctor in his God-complex, but with a crew stranded in the North Pole, “story time” does not seem in the cards. To gripe about plausibility from the Frankenstein story is like asking for realism in Alice in Wonderland, however, there are limits when suspending one’s disbelief within the confines of a story, and Bell’s hackneyed script pays these limits no mind.

The play is melodramatic and seems to be packed with a plethora of ellipses. Characters will often state a fact…allow for a dramatic pause…and then with a stunned look realize that the opposite is in fact true. Grabowski, doubling as the role of Victor’s brother Clervall, delivers the line: “You’ve decided to hunt it down…or is it hunting us?” For a play that is supposedly trying to break with convention, it uses almost every contrivance in the book. If the intention is to wink at or pay homage to the horror genre, then the rest of the production is out of step, for the performers speak these recycled banalities without a hint of irony — instead they come across as self-conscious attempts to imbue the lines with truth.

What is most frustrating is that Bell does in fact approach the story from a different angle. He delves into Dr. Frankenstein's past and the character's oft-unaddressed sexual anxieties. Nevertheless, when he does, Bell falls short of making an actual point. Rather, he offers up moments of sexual tension between Victor Frankenstein and his cousin/fiancée Elizabeth (Britian Seibert), his brother Clervall, his servant Justine (Paula Langton) and most fascinatingly the Creature (John Zdrojeski). However, these moments are gone almost as soon as they appear, and any attempt for a fresh interpretation is quickly stifled.

The actors are faced with the challenge of making the material work despite itself, and although their efforts are admirable, they cannot overcome nor compensate for the flawed writing. The battle is visible, and there is no victor on either side. Varca’s tortured and meloncholy Dr. Frankenstein guides the piece, and Zdrojeski bravely steps into the iconic role of the Creature. The commitment of both actors is commendable, and their creator/creation relationship is layered and bubbles with homoerotic undertones. The relationship is able to be fleshed out because Bell’s creature is so highly articulate (even verging on sophisticated). It’s as if his creator is one part Victor Frankenstein and one part Henry Higgins, and if it were not for some dirty makeup and an anger management problem, one might find him a charming dinner guest.

Jim Petosa directs the piece with a flair of minimalist theatricality, but (unlike the Creature) the production is not coursing with electricity. On the whole Monster remains limp and unable to thrill, excite, or terrify.