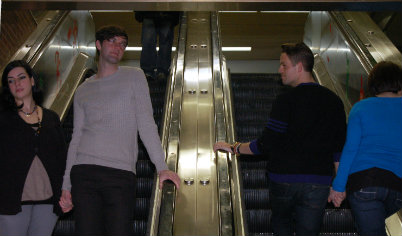 Since Craigslist became a popular web destination several years ago, its Missed Connections section has become popular both for those expressing romantic and sexual interest in someone they were too afraid to speak to when they had the chance and for those looking to find amusement in reading the posts penned by deluded oddballs that run the gamut from laughably strange to downright creepy. Creating performed comedy out of laughable Craigslist postings is not an entirely new venture: bars around the city have been hosting readings of some of most amusing personal ads and theater group The Bedlam Ensemble had a show last spring consisting of real life Craigslist ads. Royanth Productions, consisting of University of Florida alum, had a simple recipe for their Missed Connections show: reading  real life Missed Connections section ads from Craigslist with dramatic accents and silly accents.

Although many of the ads are culled from New York City, they also found laugh worthy material from Toronto, Florida, Los Angeles, New Orleans and London (where the posters seem to write with far better grammar than their American counterparts.)

There’s also an interlude between the reading of postings when the cast creates their own Missed Connections ads for audience members. Of course, this being Craigslist, most of the posts are sexually explicit often to the extent of being bizarre or repugnant. The New York City postings start off with such gems as a man who finds himself aroused by watching a woman devour a large Snicker’s Bar on the train (and can’t decide if it’s her or the chocolate that he desires). Then a woman in search of the man who stole her mother’s life savings (photo included) and man who describes in detail all the sexual things he would like to do to his male history professor.

The cast shows great talent both with their comedic delivery, performing each ad in a manner that turns it into comic gold. Ricky Dunlop in particular was especially amusing when performing the most perverse of the ads. The audience burst into laughter at nearly every ad. Although this show uses a simple formula, it certainly works well.