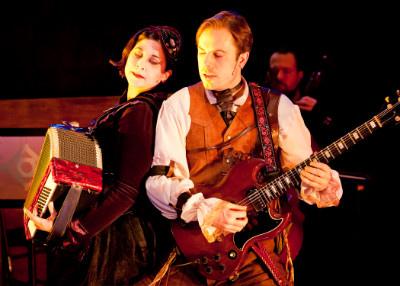 BOTTOM LINE: This "Whodunit?"engages the audience on multiple levels through a mashup of live performance, video, and a host of musical genres.

Miranda is somewhat difficult to summarize, and, possibly, that’s how its creators want it. Nevertheless, I’ll give it a shot: Miranda is a multi-media sci-fi courtroom drama rock opera with audience participation. It will remind you of Blade Runner, Sweeney Todd, The Mystery of Edwin Drood, 2001: A Space Odyssey, and, if you’re really hip, the cello-rock band Rasputina. Set in a parallel steampunk universe in which, it seems, the Civil War ended quite differently and the British Empire is still in full effect, Miranda crams a lot of food for thought into a short running time. The result falls somewhere between “feast for the senses” and “sound and fury.”

Miranda is being presented at HERE, a company that doesn’t produce theatre so much as deconstruct it, to the delight of the more adventurous segment of New York’s play-going class. Resident Artist Kamala Sankaram composed the music, co-wrote the libretto, and plays the title role; in a way, it’s fitting that a show with this many layers was brought to fruition by a multi-hyphenate. In fact, most of the cast is doing triple duty: they act, sing, and play instruments, sometimes all at once. This conceit worked like gangbusters in certain successful productions helmed by British director John Doyle, but is very difficult to pull off without the resources of the West End or Broadway; how likely is one to find a superb cellist or guitarist who is also a great singer and actor? Sankaram herself has a strong soprano voice, and the cast/band back her up with a sound that’s part rock, part musical theatre, and part opera.

There are many levels of story as well as music in Miranda. The audience is informed by an all-too eager Bailiff (Jerry Miller) that it will be serving as the jury in the trial of three suspects in Miranda’s murder. The show we’re watching is composed of reenactments of events leading up to the crime (if, indeed, a crime even took place). Even more meta, the “witnesses” and “defendants,” we are told, are just proxies for the real people involved, who are obviously too busy or important to deal with all this. After all, the trial isn’t really about justice; it’s a reality show, a “joint partnership” between the state and a private production company. Using both pre-taped video segments and live feed, human actors and a computerized, auto-tuned magistrate, the proceeding pieces together the last day of Miranda’s life, in which she discovers that her wealthy family is hiding a scandalous secret, to which her fiancé is also privy. In a world even more commercialized and even less democratic than our own, she seems to be the only person who thinks this is a problem. At the end of the night, the audience will decide which of the victim’s loved ones apparently killed her to keep the truth from coming out. Of course, it won’t really matter, as the actual suspects are not present and won’t face the consequences.

Director and co-librettist Rob Reese does an impressive job keeping all these streams from crossing and blowing the show up, Ghostbusters-style, and the design team—particularly costumer Jacci Jaye and set/lighting designer Nick Francone—do beautiful work in HERE’s intimate space. What Miranda needs now is greater dramatic weight to go with all that concept. The relationships between the characters are mostly based on assumptions—of course a man loves his fiancée, of course a mother wouldn’t kill her daughter—rather than on the depth of the performances, and powerful musical moments are sometimes undermined by regrettable lyrics. The show runs barely more than an hour; perhaps there are scenes yet to be written, songs yet to be sung to fill in the gaps between the material and its execution. And perhaps Patti LuPone can be persuaded to come downtown and take up the tuba once more. That might be just the kind of twist that the dark, wry, cynical world of Miranda deserves.

(Miranda plays at HERE Arts Center, 145 Sixth Avenue between Dominick and Spring Streets, through January 21st. Performances are Monday, Tuesday, Thursday, Friday and Saturday at 9 PM. Tickets are $20 and are available at here.org or by calling 212.352.3101.)