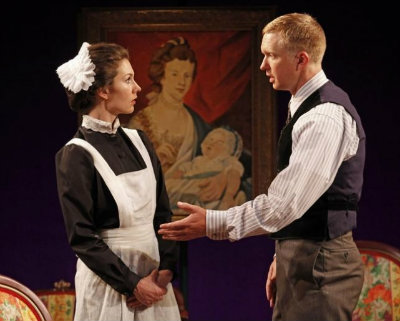 BOTTOM LINE: A period piece of morals and manners gets a new life with splendid performances and intriguing design.

The Mint Theater rarely gets to enter into pop culture discourse with its commitment to reviving long forgotten plays. Though, with the recent and lively production of Allan Monkhouse’s (that name may escape even the most dedicated theatre buffs) 1911 play about upstairs/downstairs mixing in Edwardian manor house society, the Mint adds to the current fervor for England’s final era of lavishness and strict social separation initiated by PBS's Downton Abbey. Jonathan Bank has brought to the stage a fascinating, if stilted, look at the parlor rooms of this society from a contemporary of the time. Banks’s production might be considered more historical than impactful -- but it’s a brisk, entertaining journey enhanced by the elegantly witty scenic design by Roger Hanna and the period/class perfect costume design by Martha Hally.

Unlike Downton Abbey we never quite see the underground world of servitude in Monkhouse’s script -- only the moments when the lowly members of service come up for air. The family at the center of the universe are the Timbrells. Edward Timbrell (Graeme Malcolm) is the lord of the house -- a dinosaur, the last of his kind. His son, Edgar (Rod Brogan), weds dutifully within his class to Sheila Ray (Julie Jesneck). The younger, more unruly son, Leonard (a mercurial Roderick Hill), has different priorities. He has broken the separation of classes in his house -- not out of respect for the lower classes, but out of rebellion against the authority of his father. Leonard thinks of himself as a visionary artist, a master of words and a lover of Shakespeare. The rest of his family think of him as a black sheep that needs to be kept on the outside as much as possible. Leonard's entitlement and narcissism is infuriating in a different way to his father’s unforgiving conservatism. Moreover, he is a “momma’s boy” through and through, which doesn’t help his odds in gaining his father’s approval.

Leonard’s promiscuity with a household maid, Mary Broome (Janie Brookshire, carrying the heart of the play), has led to her unfortunate pregnancy. Mr. Timbrell’s solution is to have his son married off to Mary at once or be exiled from the family. Leonard is opposed to the idea until Mary gives the slightest hint that she may be open to the idea. Leonard is genuinely touched by the notion that someone else in the world, a beautiful woman no less, could actually care for him. Amidst hesistations by all, Mary and Leonard’s marriage is given hope by the support and love of Leonard’s mother, Mrs. Trimbrell (a delightfully complex performance by Kristin Griffith). Leonard’s eternal youth and failure to understand the meaning of responsibility proves a disaster -- “Oh! The baby, I keep forgetting about that blessed baby.” Owning up to the human being he brought into the world is a hubris no better than his father’s disapproval.

Monkhouse’s script lacks compelling action, yet is full of a world of manners versus morals. It is a play that is observed rather than experienced, which is more telling about the period than anything as detailed in the dusty portraits (with some unexpected twists) of the past that loom over Hanna’s set. Bank's staging pays more attention to manners than dramatic effect which can allow the play to lull at times like a portrait in and of itself. Though, the moments of intimacy and private conversations become even more lush in contrast as Bank allows his actors to shed some of the period and play with universal human vulnerability.

After World War I, families like the Trimbrells began to lose their stature as a lavish lifestyle became less admired. Mary Broome makes a decision in the play that is surprising, admirable and perhaps inevitable. Leonard has grown up -- if only a little bit -- and the Trimbrells will never look at the downstairs staff in the same light again. Monkhouse succeeds much in assigning a little bit of blame to all, yet all to none. Mistakes were made, life goes on and soon there will be much greater issues in the world for this family to worry about. If Miss Broome brought everyone into the twentieth century even a little bit, she did a good deed and gave a great sacrifice for her home country.

(Mary Broome plays at The Mint Theater, 311 West 43rd Street between 8th and 9th Avenues, through October 28, 2012. Performances are Tuesdays through Thursdays at 7PM; Fridays at 8PM; Saturdays at 2PM and 8PM; and Sundays at 2PM. Tickets are $55 and are available at ovationtix.com or by calling 866.811.1111. For more show info visit minttheatre.org.)