$18 for adults and $14 for seniors and children

A Man of No Importance 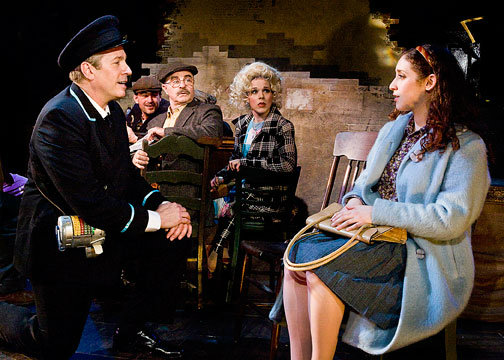 
BOTTOM LINE: A solid production of a seldom-produced musical gem, dealing with the restrictions of love in the Catholic community of Dublin in the 1960s.

It’s a rainy Dublin morning and the inhabitants of this damp and dreary city yearn for an escape from the economic constraints and the claustrophobic Catholicism that dictates their lives. Their form of escape? Art. In A Man of No Importance, Alfie Byrne (Charlie Owens), a bus driver with a penchant for drama, organizes a sort of community theatre that leads his fellow townspeople down a path of theatrical exploration and self-discovery. The result is an impassioned group of people whose hearts are bigger than their budgets, performing for nothing more than the love of their art. And the love of the art is something that is all too present in this production by The Gallery Players. Some budgetary restrictions may prevent this production from ever becoming truly polished, but scrappiness suits A Man of No Importance, and the intelligent direction and affectionate cast do the musical much justice. The heart of Alfie Byrne appears to be pumping through this Brooklyn-based company; so much so that it makes the trip to the theatre well worth the trek.

This musical, a by-product of the songwriting duo Lynn Ahrens & Stephen Flaherty (Ragtime, Seussical, Once on this Island) and playwright Terrence McNally (Ragtime, Master Class, Love! Valour! Compassion!), centers around the middle-aged Alfie Byrne who leads his neighbors in a production of Oscar Wilde’s controversial play Salome. Caught in a wrestling match between his Catholic guilt and his love for Robbie Faye (Eric Morris), a fellow bus driver, Alfie must decide if love, honesty, and art come at too high a price in his devout society. A Man of No Importance examines the constraints of love caused by the Catholic church in 1960’s Ireland; and not just homosexual love, but love that is pre-marital, extra-marital, and yes, theatrical.

Hans Friedrichs’ direction seamlessly weaves through the Dublin streets and the lives of its inhabitants. The sparsely dressed stage with its crumbling brick wall (designed by Kate Rance) and sepia colored projections (by Daniel Heffernan) create the blue collar aesthetic of this Irish neighborhood; the omnipresent ensemble provides a sense of community -- one that clearly knows everybody else’s business. Friedrichs integrates the musicians into the production and has some cast members doubling up to play instruments periodically. Undoubtedly this was achieved with the help of musical director Julianne Merrill and choreographer Christine O’Grady. While aesthetically it paints a beautiful picture on stage, this concept does not always serve the score, as these were regrettably some of the sloppier musical moments in the show. Otherwise the production is directed with commendable fluidity, applying the perfect amount of sentiment without becoming overbearing.

Owens delivers a subtle and understated performance as the conflicted Alfie, and that is the emotional anchor of the show. As Robbie Faye, the object of Alfie’s desire, Eric Morris' rendition of “The Streets of Dublin” is the musical highlight of the first act. Although undeniably well sung, Morris’ nimble swagger and buoyant energy seem more suited to the Irishmen who hide pots of gold under rainbows and not to the more hardened ones operating Dublin’s public transportation system (ever seen a jaunty MTA employee?). Renee Claire Bergeron comes off well as Lily, Alfie’s un-wed middle-aged sister, whose stern yet lovable performance recalls other Irish musical matriarchs (much like Mrs. Paroo in The Music Man). Terence McNally’s book is a gift for the actors in smaller roles; each character is fleshed out, and the company does rather nicely with what they have been given. Julianne Katz proves a lovely and broken ingenue in the role of Adele, and John Weigand’s “Baldy” O’Shea is particularly endearing in his song “The Cuddles Mary Gave.”

A Man of No Importance is one of the lesser-produced works by Ahrens & Flaherty, however this should not be a deterrent, but rather a reason to buy a ticket. All of the musical’s flaws, and there are some (such as the presence of Oscar Wilde’s ghost), are outweighed by the luscious music and the gripping yet tenderhearted story. Much like the green carnation donned by Oscar Wilde and Alfie Byrne, A Man of No Importance is a refreshing oddity; something rarely seen thus making its appearance all the more fantastic. Skillfully directed and performed, this production by The Gallery Players deserves to have theatre fans crossing the bridge to glimpse this rare and special musical.

(A Man of No Importance plays at The Gallery Players, 199 14th Street, Park Slope, Brooklyn, through February 19, 2012. Performances are Thursdays through Saturdays at 8PM and Sundays at 3PM, with Saturday matinees at 2PM on Feb 11th and 18th. Tickets are $18 for adults and $14 for seniors and children; they are available at galleryplayers.com and by calling TheaterMania at 212.352.3101.)