LoveSick or Things That Don't Happen 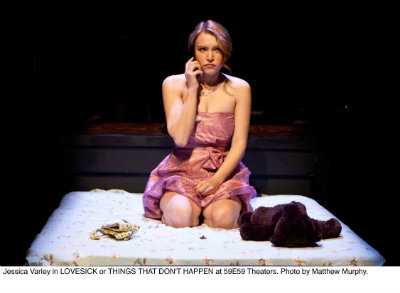 BOTTOM LINE: The dark humor of this play’s jaded takes on romantic love makes it a perfect Valentine’s Day outing for the broken-hearted and cynically single.

The hype of Valentine’s Day can make it a difficult holiday for those of all romantic situations. It can remind the single that they are in fact still alone and may be missing out on the coupledom that so many other people seem to have found. It can remind the broken-hearted of past wounds and past failures, while it can cause those currently coupled up to evaluate their relationship and question just how serious they truly are. This is the idea behind LoveSick or Things That Don’t Happen, a celebration of love gone awry through both comedy and music. It adds up to a sort of variety show, all centered around romantic entanglements. Its sardonic humor and dark outlook on romantic possibilities may make it comfort food for those nursing pain.

Matt Nathanson serves as the MC of the show, interacting with the audience, singing (some of) his original music with the cast (most of whom seem to be both theatrically and musically gifted), and introducing the different skits. Nearly all of the actors share both theatrical and musical duties, leaving their acting role to pick up an instrument. Each skit is followed by an ensemble musical performance that includes choreography.

In the opening scene a teenage girl (Jessica Varley) decides to commit suicide after her boyfriend leaves her just before prom only to get hit on by the middle-aged suicide hotline counselor (Pat McRoberts). In the next, two bridesmaids (Aidan Sullivan and Melissa Hammans) pretend to be happy for their recently wed friend, only to reveal that they both recently slept with the groom and one has carried out other secret acts of jealous revenge. In another, a man (Andrew William Smith) awakes to discover he had a one night stand he can’t remember with a crack-addicted prostitute (Teresa Stephenson) who just might also be the love of his life. In the play’s sole optimistic offering, a man (Joe Varca) attempts to get back with his ex-girlfriend (Elizabeth Elkins) by pretending to be in a soon-to-crash airplane, only to show up very much alive on her doorstep with a bag of McDonald’s fries.

The musical numbers are punchy, energetic, and sometimes funny, although they don’t always correlate with the preceding skits, those with the most coordinated choreography are the most entertaining. Matt Nathanson shows himself to be an immensely gifted, enigmatic performer, although the scripted periods of audience interaction can be sometimes unfunny and awkward, particularly when he doesn’t find the audience responses to his questions to be humorous. Romeo’s darkly funny writing, combined with the comedic skills of the cast, as well director Michole Biancosino’s knack for comedic timing, leads to the scenes being far funnier than Saturday Night Live's weekly offerings.

The primary vision linking together both the musical numbers as well as the comedic skits is that pursuing romantic love is a painful experience sure to add misery to your existence. Yet, one has to ask, why bother? Nathanson, the MC, offers this as an explanation: “..if we weren’t constantly thinking about or chasing after somebody or other — what would we do? Think about work? What would we write songs about? We’d be so bored all the time.” The pain of pursuing sexual love, be it futile or not, certainly serves to inspire some darkly amusing gems in this ode to misguided romance.

Those tired of the marketed romance of Valentine ’s Day, as well as those who are nursing recent heartaches, will find relief in the dark humor of LoveSick.