By Martha Gellhorn and Virginia Cowles; Directed by Jerry Ruiz 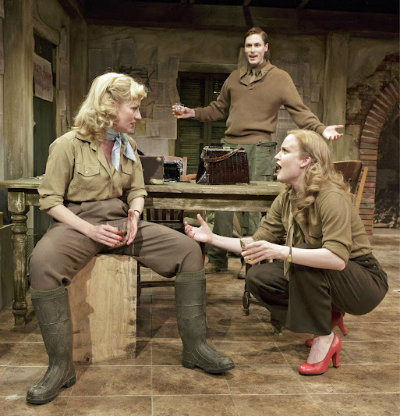 BOTTOM LINE: An imperfect yet spirited and finely crafted production of a forgotten play written by two female journalists in the 1940s.

If you think equality in the workplace between genders is skewed now (which it is) take a look at 1944 and the world of war journalism in Martha Gellhorn and Virginia Cowles's 1946 comedy, Love Goes To Press, now playing in a lively production at the Mint Theater. Gellhorn (also famous for an affair with Hemingway which has been recently dramatized by HBO starring Nicole Kidman as Ms. Gellhorn) and Crowley were actual war correspondents throughout WWII and other major world conflicts in the first half of the 20th century. Their comedy about life as women in the press is one not oft-told in the time period and was a major hit when it debuted in London only to come to Broadway and close after four performances in 1947.

The play takes place entirely within the confines of a 1944 Italian press camp run by Major Philip Brooke-Jervaux (Bradford Cover). The camp is shook up by the arrival of Jane Mason (Angela Pierce) and Annabelle Jones (Heidi Armbruster). The major’s attitude about women in the workforce can be summed up in his line, “Any decent woman would stay at home. There are plenty of quiet useful civilian jobs for women.” Jane and Annabelle are known not only for their feminine qualities, but for their cut-throat and resourceful ways of getting stories before anyone else. Romantic lines cross, however, when Annabelle’s story-stealing ex-husband Joe Rogers (Rob Breckenridge, slightly resembling Hemingway) shows up with his current fiancé, the famous British actress Daphne Rutherford (Margot White). The misogynistic Major Philip eventually falls for Mason and tests her devotion to her career.

This script is notable as a 1940s play penned by two female playwrights, however it plays better as a historical artifact of feminism more so than a glowing example by 2012 standards. The female characters still spend the majority of the play discussing men and relationships rather than their careers or ambitions. For 1946 though it was clearly ahead of its time and Crowley and Gellhorn should be commended for using the romantic comedy structure of the time to pose some dilemmas of women in a male-dominated field. Annabelle and Jane are starkly contrasted in independence in comparison to the British actress character of Daphne. While the play doesn’t always exactly clip along at 150 minutes, the witty dialogue still pops more often than it falls flat. There is some juicy 1940s Hollywood-style badinage going on that is irresistible, like Jane’s “I’d better finish cleaning up...I’m so dirty.”

The comedy isn’t always laugh-out-loud funny, but is reflected rather through the play's light take on war. The battles and dying men becomes fodder for career aspirations rather than a portrait of humanity. It’s a little similar to MASH in this way, allowing the war to exist as a backdrop for the story and these characters rather than being the focus. The play also becomes an excellent bookend with Donald Margulies’ 2010 play Time Stands Still which dealt with the conflict of domestic life and war journalism for women covering more recent wars. Crowley and Gellhorn’s precursor to that play simply amps up the campiness and bluntness of the two lifestyles more blatantly. It examines what I call the “Hurt Locker Effect,” only for journalists: once you’ve experienced the rush of life and death circumstances, biding your time in everyday society is near impossible.

The casting is mostly spot-on. The dynamic duo of Pierce and Armbruster as our trailblazing female heroes has winning chemistry on stage. The other male journalists in the cast provide some of the more subtle comedy with particularly excellent performances by Jay Patterson and Curzon Dobell. Occasionally there are a few stylistic clashes in the acting. This relates to a few moments in the show that stick out in an unfortunate way drawing us out of the world of the play. Director Jerry Ruiz oddly seems to be directing an entirely different play altogether in a few moments when the acting and mood go over-the-top, feeling like a soap opera parody. It feels unmotivated and against the grain of Gellhorn and Crowley’s script. Luckily Steven C. Kemp’s gorgeous forced perspective set, as well as the actors's sharp timing, brings us back into the story each time. Andrea Varga's costumes pay close attention to historical accuracy as well as the design unity of this production. Jane Shaw’s sound design is also effective in alluding to the war but letting us know it’s not at the forefront.

The Mint Theater’s mission “to bringing new vitality to worthy but neglected plays” can be a risky one. Often times a play dies because it is dead. However, Love Goes To Press is more than salvageable and the passion for the history of the play is evident dramaturgically in the lobby, the program notes and on stage. That passion and attention to detail exhibited by The Mint is precisely why this production works where other attempts may fail.