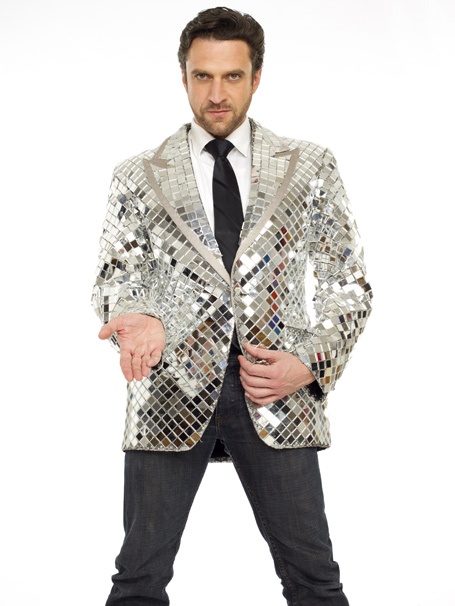 Raul Esparza in LEAP OF FAITH.

BOTTOM LINE: Leap of Faith is a bland but enthusiastic musical about an con-man who finds a reason to change his ways.

As I settled in my chair at the St. James Theatre on 44th Street, I noticed a clutch of enthusiastic actors near the front of the house passing out prop money and trying desperately to rouse this lukewarm crowd. It was clear from the start that this would not be an easy task. Finally the lights lowered, and the full ensemble took the stage for the jubilant if awkwardly choreographed opening number “Rise Up!” It was then that I overheard a young, gay chorine-type sitting nearby mutter, “Well this is a mess already.”

Having already been dismissed or downright derided by most the critics, it isn’t surprising that the Wednesday night audience remained skeptical, but tales of this show’s death have been greatly exaggerated. It’s really not dreadful; it’s just not very good.

Leap of Faith, currently vehicling Raul Esparza on Broadway, tells the tale of a sinner with a heart of gold. (The musical is based on the 1992 movie of the same name, which starred Steve Martin). Esparza plays Jonas Nightingale, a traveling evangelist who brings folks hope, but leaves ‘em broke. When he breaks down outside the drought-ridden town of Sweetwater, he decides this will be his greatest score yet. But with a town of truly worthy souls led by an attractive, tough-talking sheriff and her disabled but faithful son, maybe Nightingale has been brought for a different reason.

The story is as predictable as it sounds—a story told so many times, with no deviations, surprises, or even new perspectives. The songs seem to come from little impetus and end as unexpectedly. The characters are as broadly drawn as the narrative, depending on the audience to fill in the details of stock situations and personalities. The worst sufferers are the supporting cast, who throw out hints of shady pasts or demons to overcome, but then carry forward without further development. Instead of building, the audience is told what they need to know to move forward.

And as such, the pacing is actually perfect. Under Christopher Ashley’s experienced direction, Leap of Faith moves right along, promising something new coming up, and delivering quickly.

And not to say there aren’t entertaining moments. After that opening, Sergio Trujillo’s choreography turn 180 degrees, becoming fun, inventive, and clean. There are fabulous ensemble numbers like “Dancing in the Devils Shoes,” hilarious hijinks,  and a steady stream of solid (if easy) jokes from book writers Janus Cercone and Warren Leight and lyricist Glenn Slater. And of course Alan Menken’s music is expectedly diverting, if sometimes forgettable.

The greatest obstacle in this production (aside from its safe predictability) is the lack of chemistry between Raul Esparza and love interest Jessica Phillips (Sheriff Marla McGowan). Their affair begins with a debate over whether or not they share a spark. They don’t, and no one watching would take the pro-spark side of this debate. It remains baffling how they get together despite mutual coldness.

That being said, Leap of Faith actually features some fabulously talented performers who work their fannies off dragging this show across the finish line. Esparza is funny and charming and Phillips is likable. The ensemble gives it all they’ve got—which is a lot when you’re talking about Broadway-caliber performers. Kendra Kassebaum is a riot as Nightingale’s cynical sister Sam, Kecia Lewis-Evans brings her signature strong black woman presence and preponderant voice as the head gospel singer, Talon Ackerman wins the audience completely as the hopeful handicapped boy, and playing the true believer, Leslie Odom, Jr. wows with his acrobatic, soulful voice. The gorgeous Krystal Joy Brown rounds out the supporting cast, belting high and kicking her face just enough to make you know she’s underused and should have been given more to do!

The one truly affective moment comes when Esparza is given an emotional soliloquy alone out on the apron’s thrust. Dramatically spotlighted and haloed by a scrim of stars, we finally see what Esparza can really do. I thought, “This is why Raul is a star. I can’t wait for his next project when he can do more of THIS.”

At the end of the day, Leap of Faith may not totally make sense, and it may not have made the best choices or accomplished anything great along the way, but it’s not so bad as people are saying. It’s just nothing anyone needs to see.