Off Off Broadway, New Play
Extended through 11.3.11
The Flea, 41 White Street 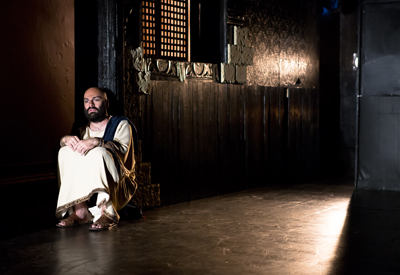 Thomas Bradshaw understands shock value, and his new play Job is infused with unbelievable moments. But the play's biblical source material tells a story of great suffering, so rape, castration, incest and necrophilia don't seem completely off-topic. Job is a dramatization of the Book of Job, and as such takes hyperbolic creative license in the recreation of the story. Much of the gratuity is for the sake of comedy...deliciously uncomfortable comedy presented to prove a point. Bradshaw gets under his audience's skin, and love it or hate it, it enhances the message.

Job sticks pretty closely to its source material: a fortunate man is incredibly pious, and God decides to test his reverence. Job (Sean McIntyre) is a righteous man, incredibly grateful for his children and riches (both abundant). But will a man who reveres God do so even when bad things begin to happen? In the play, Satan (Stephen Stout) and God (Ugo Chukwu) are brothers, and Satan challenges God to an experiment: how much can Job endure before he begins to blame God? As God's sons Jesus (Grant Harrison) and Dionysus (Eric Folks) bicker in the background, Job's life systematically gets suckier for the sake of divine research.

Performed by The Flea's resident acting company, The Bats, Job is selectively self-aware in its storytelling. The Bats are quite good at this approach to comedy, and Bradshaw infuses enough farcical elements in the script so the play is constantly dynamic, wavering from history play to farce, with an occasional wink at the audience to make sure no one is taking any of this too seriously. Director Benjamin Kamine lets The Bats play, and Job has a youthful infusion of spunk that goes well with this kind of irreverence. That said, Kamine's work is tight and nuanced: alternately epic and laid-back, depending on what's necessary in a moment.

Another delightful attribute is Job's use of dance, choreographed by Joya Powell. Both Satan and God have a signature happy dance, performed whenever something pleasing occurs. Job's children die? You can expect Satan to smirk and shake his hips. Job still devout? Time for God's routine jig. There is also an enjoyable production number that involves most of the cast (a big ensemble in a tiny space). The use of movement further colors the play.

At a clean 60 minutes, Job doesn't have enough time to belabor its point. And this is wise, because the message of the play syncs with the message of the bible story--- the difference is that we're looking at the circumstances through the eyes of a wily 21st century playwright. The Flea presents Job as the Old Testament component to their fall line-up, which will later debut A.R. Gurney's new play Heresy, taking us into the New Testament. Awesomely indecent for purposes both philosophical and comedic, Job is a wildly entertaining show deserving of your time and worthy of its recent extension.