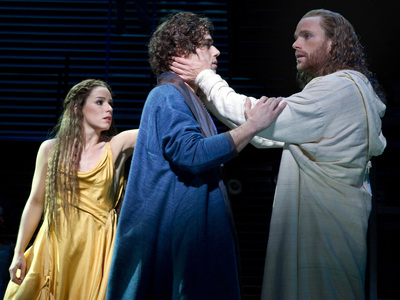 The story of Jesus Christ's religious popularity and bloody demise is a hell of a tale (a heavenly tale?). Conflict, friendship, betrayal, murder, even a love story of sorts -- sounds like most Broadway musicals, actually. Jesus Christ Superstar, the 1970s rock opera by Andrew Lloyd Webber and Tim Rice, is now being revived on Broadway in an energetic and theatrically satisfying production. After successful runs at Canada's Stratford Festival and then the La Jolla Playhouse in California, Superstar returns to New York for its fourth Broadway production (it was last revived in 2000).

I admittedly have never seen this show, so I don't have a basis of comparison for this production against other Superstars. But this production does excel on several levels. With a clear reminder that we are going back in time in the form of a projection ticking back time from the year 2012 to the year 33, the show maintains a nod to a futuristic sensibility. Metal scaffolding and particularly modern costumes give a Star Trek feel despite the historical basis. A liberal use of projections maintains this throughout the show and we are informed of the changing days through electronic signage in the style of a stock ticker. The multi-leveled set and cyborg aesthetic provide an active, timeless vibe. It matches the synth-rock score that, although totally cheesy, defines the theatrical experience that Superstar provides.

Another Superstar asset is its energetic and capable cast. Paul Nolan, as Jesus, and Chilina Kennedy, as Mary Magdalene, have terrific ranges, and both sing the show impressively. But Josh Young, as Judas, is the most compelling of the three, with a strong set of pipes and appropriate attention to his character's emotional journey (something that's not always discernible from the rest of the cast). The ensemble is young, and their spirit is enabled by Lisa Shriver's lively choreography. There's a So You Think You Can Dance thing going on, with athletic, often hip-hop-inspired movement. Is it totally appropriate for this show?  Sure. The production is coherent, and for a show that doesn't offer much narrative structure, this revival is totally true to itself and its interpretation of the story at hand.

Superstar's biggest flaw, for me, is its lack of dramaturgical support. The story is well known, hell, it's probably the most well-known of all stories out there. Although this means there inherently aren't any plot surprises, Superstar skates by on its briefly defined narrative, with way more attention paid to the music and the orchestrations. No shame in this, it's a rock opera afterall, it just doesn't make for a very compelling play. And when you're not invested in the characters' journeys, it's a lot easier to feel distanced from the production.

Fans of this show, or of Andrew Lloyd Webber in general are encouraged to check out this production. Those musical theatre aficionados are likely to find much joy at the Neil Simon Theatre, though I'm not sure it's likely to convert non-believers.

(Jesus Christ Superstar plays at the Neil Simon Theatre, 250 West 52nd Street. Performances are Tuesdays at 7PM; Wednesdays at 2PM and 7PM; Thursdays at 7PM; Fridays at 8PM; Saturdays at 2PM and 8PM; and Sundays at 3PM. Tickets are $35-$140. For tickets visit ticketmaster.com. For more show info visit superstaronbroadway.com.)