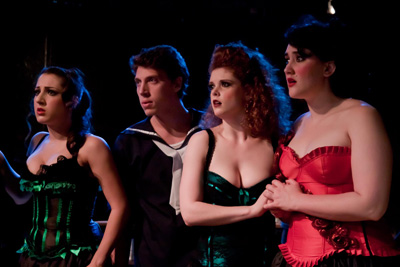 BOTTOM LINE: An over-the-top musical comedy about a crossdresser trying to catch the infamous Jack the Ripper.

Jack the Ripper, the serial killer who terrorized London’s Whitechapel district in 1888, was never caught. Thus, his story and identity are open to interpretation and it is not so surprising that a new musical has emerged to tell one version of that story.

Jack’s Back, a new musical comedy playing at T. Schrieber Studio, tells the story of Herbert Wingate (Casey Shane), a sausage-stuffer who devises a plan to catch the man who has been murdering prostitutes in his neighborhood. He disguises himself as a female prostitute and goes by the name Miss French, hoping to attract the attention of Jack the Ripper and kill or capture him. He has several motives: to restore safety to Whitechapel, to protect his sweetheart, and to gain the cash reward that will allow him to move his mother, the well-liked brothel madame Martha (Arley Taparian), to America for a better life. A series of misunderstandings and mistaken identities drive the plot forward, all while Herbert attempts to track down the mysterious killer.

This production’s strongest aspects are the writing and performances. Tom Herman has written some catchy and well-crafted songs that serve to tell the story while also adding a certain campy and comedic style to the show. “Who is Jack the Ripper?” is one stand out, in which three possible suspects (including the actual killer) dance together.

Among the performers, Julia Udine stands out as Herbert’s girlfriend, Jenny. Udine perfectly embodies the sweet and simple character, while using facial expressions to exaggerate her persona. The musical number “Why Not Be Rich?” is a great moment for Udine’s Jenny: a new side of her emerges as Jack the Ripper (Lance Olds) seduces her with dreams of a wealthy future. Olds, too, is a standout. He portrays the killer as a dandyish and creepy gentleman. During the song “A Most Agreeable Fellow” he juggles three large knives while singing about the type of man he is. The major characters are supported by a talented chorus that gives many of the songs the kind of fullness of sound that make musicals such a force of energy.

However, while the writers and cast are a talented bunch, their contributions are often overshadowed by the production’s direction and choreography (John Gould Rubin and Bronwen Carson, respectively). For me, there was too much movement on stage and, especially during some of the musical numbers, I felt a little overwhelmed by what I was watching. There seemed to be a dance move attached to every word and, though the performers were working very hard, the movement was not very pleasant to watch. Though this seemed to be intentional, the effect was more distracting than entertaining and pushed the show from being funny and energetic to being vulgar and frantic.

Jack’s Back is entertaining and the show offers much potential. However, rather than define itself with an aesthetic and style, it frantically tries to go overboard. Unfortunately, it succeeds.

(Jack's Back plays at the Gloria Maddox Theatre, 151 West 26th Street, 7th Floor, through June 24, 2012. Performances are Wednesdays through Fridays at 8PM, Saturdays at 2PM and 8PM, and Sundays at 3PM. Tickets are $20 and can be purchased by visiting ovationtix.com or by calling 866.811.4111. For more show information visit tschreiber.org.)