In the Summer Pavilion

By Paul David Young; Directed by Kathy Gail MacGowan
Produced by Go In Her Room Productions and WorkShop Theatre Company 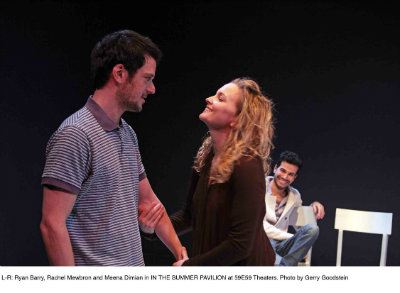 BOTTOM LINE: A sexy, searing offering of the vast possibilities of life and love crafted by a sharp, poetic voice.

There’s a sort of call to action or, perhaps more accurately, a call to reflection upon leaving Paul David Young’s In the Summer Pavilion, presented by Go In Her Room Productions in association with WorkShop Theater Company. A soft, introspective elegance pervades the work and after a day or so, the show lingering in my mind, Young’s intentions start to become clear. The result is a surprising poignancy that manifests again and again on level after level the longer the play sits on the brain.

The plot is familiar. Three friends, Ben (Ryan Barry), Clarissa (Rachel Mewbron), and Nabile (Meena Dimian), enjoy each other’s company the night after college graduation, and as the classic coming-of-age story goes, they consider the many possibilities of their futures. But the reality of this night is heightened and poetic, and these futures, perhaps aided by the drugs and alcohol, come to vivid life. Possible future after possible future, their lives are taken in vastly different directions, but there is always the sense that they are inexorably linked. And by all accounts, this isn’t always a healthy thing.

The trio is anchored by Ben, the only character who seems able to lift this veil of alternate reality. Ben speaks to the audience and, in anticipation of our possible confusion, nearly chastises our need to look for characters on a stage to bring about catharsis. But he warns that the doors are locked, that they will keep us until they are done. It is this aspect of Pavilion that stays with you once the story has been told. Playwright Young is not telling the story of these three characters specifically; he is telling the story of friendship. He is telling all of our stories.

Interdependence, identity, and the confusion between friendship and love take center stage. These characters’s friendships were formed during the explorative playground of young adulthood, which has been tinged by sexual experimentation of all possible combinations of the three. In the first possible future, Ben and Clarissa are the two who have allowed friendship to give way to love. When Nabile arrives for a visit, he professes an attraction to, or perhaps even love of, Ben; Ben spurns his advances. In another possible future, Clarissa and Nabile are together; in another it is Ben and Nabile. With each different grouping, the characters’s lives, occupations, and mindsets are drastically different, and in each scenario, the characters flirt with heartbreak and betrayal.

Though there seems to be a slight sense that Ben and Clarissa possess the best possibility for romantic success, Young does not allow any judgments to be made. Ben hints at Clarissa’s metamorphosis into something that for whatever reason prevents their being together, but by the end of the play, the “costume” to which Ben initially refers is revealed to be the persona that each of us adopts as adults, meaning that perhaps at our young, idealistic college age we are truer to ourselves than we will be ever again.

Under the delicate direction of Kathy Gail MacGowan, Barry is a complex cacophony of neuroses and subtext. Barry’s Ben lives a constant struggle to be normal, to be young, to see his friends at their best. His interpretation of Ben is an optimist who is too plagued by pessimism to achieve any happiness. He’s far too internalized to ever actually connect with Mewbron’s artistic, ephemeral Clarissa or Dimian’s hedonistic, sly Nabile. MacGowan has shaped a world that gives the audience the knowledge that these friends undoubtedly belong together in some capacity but that romance will most likely lead to disaster. As a result, it’s as if we’re watching an impending collision in slow motion, and we leave only wishing we had the power to stop it.

And since there is no optimal outcome, it is easy to leave Pavilion wondering about the ultimate purpose. It might be tempting to dismiss Young’s explorative piece as anticlimactic or even self-indulgent, a showcase for his obvious artistry in language. But I would encourage the viewer to approach this piece with no preconceptions of the literal or the linear. This is play is reflective — reflective for the characters as well as the audience.

On the technical side, I would be remiss not to compliment that unsung theatrical hero, the stage manager. Bethany Ellen Clark’s detail in management is evident in the perfect execution of Kia Rogers’s lighting design and especially Julian Evans’s crisp, jarring sound design. On the nearly bare stage, these technical elements meld perfectly with Young’s script and, of course, MacGowan’s direction.  The result is a hip, electric world for the skilled actors to explore.

But again, Young’s play will resonate long after the specifics of Ben, Clarissa, and Nabile's story or the events in the play fade from memory. This work seeks to appeal to our nostalgia, the way we once saw the world only through possibilities and the way we look to those around us, at their best and their worst, and see a reflection of ourselves. Young’s words drip with the poetic reminder of who we once were and who we have the capacity to be.