Off Off Broadway, New Play
Extended through 12.11.12
The Flea Theater, 41 White Street 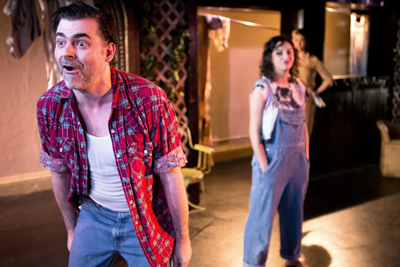 BOTTOM LINE: The American South at its absolute worst, in a very derogatory yet very engaging lyrical play.

How much racism can you cram into 60 minutes? A lot. A whole lot. I Hate Fucking Mexicans presents a Southern family with backwards values and a remarkable amount of ignorance. They rally against the non-white, non-American "evolutionists" -- specifically the Mexicans and Nigerians who live in their town and are, as the bigot creed goes, taking their jobs (for lack of any legitimate threat).

This play is hyper-stylized, both in structure and production. Told through poetic narration, a sense of reality as we know it is abandoned, and this allows for the subject matter to marinate in its uncomfortable humor. The caricatures are bold and the play is very funny; this makes the damning message about racist America abundantly clear.

But here's the kicker. I Hate Fucking Mexicans is written by a Mexican, and was originally produced in Mexico. So the way these characters are portrayed is through the eyes of the race the play oppresses. To have the commentary come from beyond American borders makes a much stronger point.

Five swift actors portray all of the characters, and they work together to tell this lyrical tale. The main narrator is Tamara-Lee (Layla Khoshnoudi), and she and her family provide the bulk of the oppressive viewpoints. They are the typical redneck family, racist without provocation. But when provoked watch out. Tamara's uncle Arnold (Adriano Shaplin) seeks revenge against the Nigerians for an accident that left his son Barry Joe (also played by Shaplin) "retarded" and makes it his goal to kill any who cross his path. His wife Laurie (Michelle Silvani), ironically deemed "The Sensible One," tries to keep his murderous habit at bay, but becomes wrapped up in religion, which by her definition involves God and aliens and an eventual suicide complete with white sneakers. Meanwhile, Tamara-Lee and Barry Joe have a longstanding incestuous relationship that is really more of a friendship with some light penetration; things get muddy when Barry Joe gets a girlfriend (played by Janice Amaya). Also, Tamara has chosen to live in a wheelchair, because it is easier than walking everywhere. Eliaya (Ugo Chukwu) is a local Nigerian who is running for mayor; though he is tyrannized by the aforementioned family, he spews his own hateful rhetoric against the Mexicans when it benefits his political agenda.

In I Hate Fucking Mexicans, everyone is awful. But they represent a viewpoint on immigration issues and racism in the United States, and it's hard to deny a baseline of truth through the obvious hyperbole. Along with a poetic style of delivery, which includes all the characters participating in a "then he said" story that is told directly to the audience, the play takes us to an outside world to look in on an exaggerated reality. Director Danya Taymor does remarkable work fluidly connecting each moment within this non-linear play. And the use of movement enhances the flow, with modern dance (lots of gestures) interspersed within the blocking. Choreographer Tymberly Canale infuses the play with a sense of unpredictability; sometimes the characters move together and sometimes they move alone, but each moment speaks to their world.

Despite clearly uncomfortable subject matter, I had a great time at this play; it is full of humor (not so much in a funny ha-ha way) and the cast does an exemplary job committing to outrageous characters who could become too scattered in less capable hands. For its intellectual efforts, playwright Luis Enrique Gutiérrez Ortiz Monasterio says much about the American South within 60 minutes. He never comments directly, but the community he draws is so damning that the inference is solid. Though the play is clearly hyperbolic, as they say, there's some truth in every jest. And this truth is rather deplorable.

(I Hate Fucking Mexicans plays at The Flea, 41 White Street, through December 11, 2012. Performances are Mondays at 7PM; Tuesdays at 9PM; Thursdays at 9PM; Saturdays at 9PM; and Sundays at 1PM. Tickets are $20 and are available at theflea.org.)