If There Is I Haven't Found It Yet 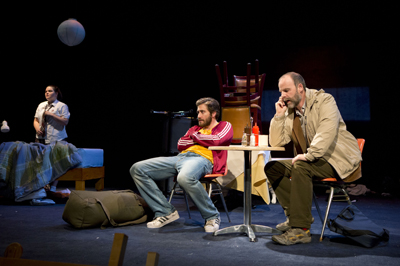 Annie Funke, Jake Gyllenhaal and Brían F. O'Byrne in IF THERE IS I HAVEN'T FOUND IT YET. Photo by Joan Marcus.

BOTTOM LINE: Come for the performances, stay for the set.

Let’s get a couple of things out of the way. Yes, this is the play that stars Jake Gyllenhaal, and yes he gives a wonderful performance in his New York stage debut. His performance is layered, his skill is evident, and he is completely committed. Fans will not be disappointed. If that’s all you wanted to know, you are excused from the rest of this review.

In Nick Payne’s If There Is I Haven’t Found It Yet, Gyllenhaal plays Terry, a wandering, stoner man-child. He finds himself at his brother’s house after some time away, and is invited to stick around. Terry’s brother George (Brían F. O’Byrne) is a professor and author who studies climate change. He passionately lectures on reducing the carbon footprint, but he can’t quite seem to grasp the more personal issues going on at home. George’s 15-year old daughter Anna (Annie Funke) is obese and unhappy. She has begun lashing out at the bullies at school, also -- unfortunately -- where her mother Fiona (Michelle Gomez) works. Terry’s arrival means fresh eyes on this troubled household. And his intervention is just what the family needs.

If There Is I Haven’t Found It Yet is a serviceable family drama with enough tension to keep things interesting and enough quirks to keep a sense of humor. The play premiered in London a few years ago and this production fits well in Roundabout’s off Broadway space, which is just small enough to get personal but too big to be all that intimate. This story is sweet and a little too tidy -- a smaller space would make it all the more saccharine.

Beowulf Borrit’s elaborate set adds another dimension to the play, giving us something else to watch and occasionally diverting our attention away from the plot (which gets a little predictable, so this visual element helps keep things engaging). The play begins with a rainstorm; a moat on the lip of the stage collects a pool of water. As the drama unfolds, the cast builds various sets with furniture taken from a pile center stage. When it's time for a scene change, the pieces get thrown (or tossed, or angrily flung) into the moat. Toward the end of the play, the stage itself begins to fill with water and the cast must wade through several inches. Though the metaphor is doubly heavy-handed (global warming makes glaciers melt, and the family is “under water” too!) Borrit’s set offers a lesson in clever stage design. Paired with Natasha Katz’s appropriately dramatic lighting, If There Is… is remarkable to watch.

If There Is… is a vehicle for a great ensemble. The cast works well together, and Payne’s clever use of awkward conversation enhances the characters’ complicated relationships. Funke does teenage malaise well, and her disdain is echoed by Gyllenhaal’s anti-establishment demeanor. O’Byrne and Gomez counter these two as seemingly grounded adults who, it turns out, can barely hold it together themselves.

Director Michael Longhurst keeps all of the actors on stage throughout the play -- sometimes we see them inhabiting another space, and sometimes they are hidden from our view -- which prohibits the audience from ever escaping the problems plaguing this group of people. As the story develops and the situations get messier, the stage picture does too. Longhurst is highly effective in his arrangement of actors, creating a visual rift in the otherwise realistic storytelling.

If There Is… has a lot going for it, especially its cast and design elements. Written by a young playwright a few years back, it wants to be meatier than it is and as such, there’s not a lot to take with you after the curtain falls (the waters recede?). But the experience itself is worth your time and (if you can afford the steep ticket price of $100) your money too.

(If There Is I Haven’t Found It Yet plays at the Laura Pels Theatre at the Miriam and Harold Steinberg Center for Theatre, 111 West 46th Street, through November 25, 2012. Performances are Tuesdays at 7:30PM; Wednesdays at 2PM and 7:30PM; Thursdays through Saturdays at 7:30PM; and Sundays at 2PM. Tickets are $100. To purchase tickets visit roundabouttheatre.org or call 212.719.1300.)