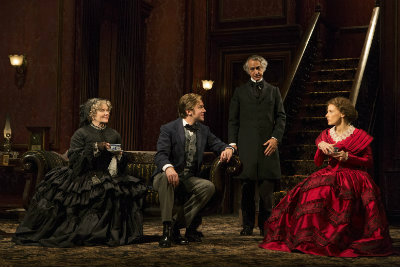 BOTTOM LINE:  A highly-anticipated revival that doesn’t just live up to the hype — it transcends it.

Isn't is nice to know that you can still sit in a dark theater, watch a curtain rise, and be utterly enchanted? This is the true wealth of The Heiress.

It is 1850, and Dr. Austin Sloper has never recovered from the death of his wife. While he considers himself a meticulous and proper man, he’s failed to realize that his business-as-usual approach to life has cast a dark cloud over his opulent Washington Square home — a home that is at a loss for no comforts besides emotion. But Dr. Sloper is prepared to live the life of the devoted widower, despite the effect that it has on his only daughter, Catherine, whose birth caused the young bride’s death. Together (with the house staff), they share a well-mannered life in which Catherine learns to perform the duties expected of her: needlepoint, philanthropy, and the eventual marriage to a man befitting her status and wealth.

This upbringing has left Catherine a child, still craving the paternal approval that she will never receive. Despite her adherence to his each and every wish, Catherine has committed the ultimate unforgivable sin in her father’s eyes: she is not her mother. Catherine does not match her mother in beauty, grace, or social interactions, and while her father is not a purposefully cruel man, his idea of support is to continually point out the many qualities she lacks.

Despite warnings from his sisters about his cold approach with Catherine, Dr. Sloper believes that his intentions with his daughter are noble, preparing her for a cold world that will inevitably plot to obtain her large inheritance. And before long, this very fear is put to the test with the arrival of a young, free-spirited man named Morris Townsend who lives off his widowed sister and who squandered his own inheritance as he traveled through Europe. Two weeks after Catherine and Morris are introduced, they are engaged, and Dr. Sloper can only assume that the young charmer’s interests lie in the family bank account.

Ruth and Augustus Goetz’s 1947 play has seen multiple revivals on Broadway. And indeed, the play is impeccably structured. Each character possesses sympathetic qualities, and it is easy to find yourself siding with Dr. Sloper at one moment and Morris the next. But it is to the credit of director Moises Kafuman’s masterful hand that the focus remains not on who is wrong or right, but on Catherine’s evolution as she begins to navigate life on her own terms.

In her Broadway debut, Jessica Chastain portrays the meek and awkward Catherine, and to her credit, Chastain manages to take a character who seeks to fade into the background and make her somehow mesmerizing. Uncomfortable in every movement, Chastain is a crucible of insecurities. Every movement of her eyes, every fidget of her hands is an obsessive checklist of manners, formality, and civility, held up by a posture that has been permanently damaged from her father’s expectations. Even as Catherine gives in to her feelings to Morris, Chastain manages to make the words “I love you” sound like they had never before been spoken — an alien phrase or a lost language that resonates with a tone of mystery and even dread. And that’s just act one.

Avoiding spoilers, Chastain’s metamorphosis throughout this play is theatre worth cheering for. She is Ibsen’s Nora who seeks not to leave the doll’s house — she seeks to control it. Chastain’s Catherine becomes, to her father’s detriment, everything he always wanted her to be.

But despite a masterful performance in the title role, the success of this play does not rest solely on Chastain’s shoulders. David Strathairn, despite audible reproach from the audience for his chilly demeanor, achieves enviable nobility in his attempt to protect his daughter. As Dr. Sloper finds himself losing more and more control of his world, Strathairn devolves from pillar to rubble. As Morris, Dan Stevens provides an ideal counterpoint to Strathairn. His charisma charms both Catherine and the audience, and his true intentions spark many a post-curtain debate.

Though these performances are near-perfection, the heart of this production lies in Judith Ivey’s performance as Lavinia Penniman, Dr. Sloper’s widowed sister and Catherine’s only confidant. Ivey’s breathless exuberance is a wealth of comedy and charm; her warmth casts a glow on the other characters that illuminate them as manifestations of their best qualities — Dr. Sloper loving and paternal, Catherine as a graceful beauty, and Morris as a dashing and honest suitor.

The Heiress is one of those plays that makes you think, as a fellow audience member exclaimed during the curtain call, “Now this is theatre!” From the moment the curtain rises on Derek McLane’s gorgeous set, theatre magic pervades. From Albert Wolsky’s costumes to David Lander’s lighting, only the smallest details could be nit-picked, but to do so would be near-criminal. This is a piece that does not revel in self-indulgence or condescension. The Heiress is one of those few shows that achieves everything good theatre sets out to do — it transcends.