The Eyes of Others 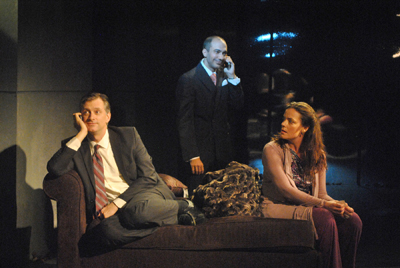 Michael Frederic, Evan Zes, and Danielle Skraastad in THE EYES OF OTHERS. Photo by David Arsenault.

BOTTOM LINE: Happiness and the search for purpose are thoughtfully examined in this hyper-stylized play.

Ivan Dimitrov's new play, The Eyes of Others, follows four characters through their seemingly banal lives. First Man (Evan Zes) and Second Man (Michael Frederic) work near one another and gather during their lunch breaks each day for the sake of company. Though their friendship is seemingly surface -- for example, they talk about what they might eat though they never actually leave the square to get food -- they need one another. When Second Man stays home from work, both of their lives are jostled. Jackie (Danielle Skraastad) keeps Second Man company while he's at home. First Man, in his newfound aloneness, stumbles upon a local store manned by Shopgirl (Zoe Winters). Something of a friendship develops between the two.

Absurdist in an almost eerie way, The Eyes of Others presents characters who operate in circles and spend a lot of time waiting, but still seem to understand that their quest is one for validation and happiness. The antidote to loneliness is found (as the title suggests) through the eyes of others. We see this most specifically from the lunchtime gatherings, as a third unseen man is always there watching the two. Though the pair has never talked to the third man, when he disappears his absense is felt by both of them. A sense of meaning is lost without the anticipated voyeruism.

The Eyes of Others ponders how our behavior actually matters when no one is watching, though it doesn't attack these questions head-on. Instead, it presents these existential quandries with an attention to stylized storytelling. We are then left to analyze the experience ouselves. Samuel Buggeln's tight direction cleanly leads the actors through the sterile set with movement that sometimes seems more like choreography; the direction maintains a playfulness and profundity at the same time and the result is captivating. David L. Arsenault's set design presents the square as a tall, cement locale with deep perspective; several openings in the structure provide ample ways for the cast to get on and off stage which helps keep the staging interesting. Max Doolittle's lighting design is a gorgeous compliment to the outdoor setting, adding extra discomfort and otherworldliness when necessary. And all four cast members understand the absurdist intentions and precisely execute the production's nuanced style. I should mention that there is a fifth character, Pizza Delivery Man (Matthew Frazier), but he is on stage for all of three seconds and the most you get out of the character is the mental break in which you think, "I hope that actor has a good book backstage."

This play is conceptually abstract so its specific message (beyond the obvious) is somewhat buried, though it engages the audience in the search for interpretation. However that interpretation isn't necessarily clear once it becomes known. And that can either delight or annoy, depending on how precisely attuned you like to be to a story unfolding before you. The Eyes of Others examines existentialism via the recognizable workday, something everyone can understand. But the extent to which you engage with its implication is entirely on you and your willingness to digest some heady stuff.

(The Eyes of Others plays at the New Ohio Theatre, 154 Christopher Street, through September 28, 2012. Performances are Wednesdays through Saturdays at 7:30PM, with additional performances on Sunday, September 23 at 3PM and Tuesday, September 25 at 7:30PM. Tickets are $18 for adults and $12 for students/seniors and can be purchased online at NewOhioTheatre.org or by calling SmartTix at 212-868-4444. For more information visit NewOhioTheatre.org.)