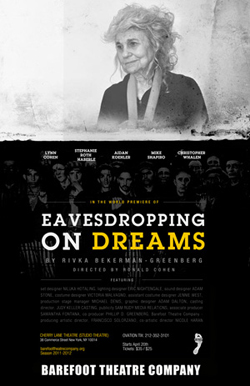 BOTTOM LINE: A riveting drama that focuses on the ways successive generations of Holocaust survivors are poisoned by the legacy of Nazi abuse.

We’re often told that we can’t live in the past, but what happens when the past lives in us?

Rivka Bekerman-Greenberg’s searing play, Eavesdropping on Dreams, introduces Rosa Eberkohn (played with tremendous grace by Lynn Cohen), an elderly Holocaust survivor who has no interest in revisiting the days of yore. While Rosa simply wants to spend her final years in peace, her 25-year-old granddaughter, Shaina, (the equally powerful Aidan Koehler) is haunted by the Nazi era and wants to better understand what happened to her relatives. Time is of the essence, Shaina realizes, and her sense of urgency is palpable. In fact, her curiosity is so strong that she dropped out of medical school, broke up with her boyfriend, and trekked to Europe to see what she could piece together. The play opens with her return to the US from four-and-a-half months abroad.

Shaina — which means beautiful in Yiddish — knew just the bare bones of her grandmother’s story when she set out. Bubbe, she’d been told, had come from Poland’s Lodz Ghetto and has spent time in Auschwitz. She also knew that many members of the Eberkohn family had perished in the Camps and that her grandmother had once been a prominent milliner, designing hats for the country’s elite.  Was there more to the Eberkohn story, she wondered?  Although Shaina’s trip helped her to cobble parts of her history together, she still has questions that only Bubbe — or maybe her mother Renee, a haughty neonatologist — can answer.

Sadly, Renee (played by the terrific Stephanie Roth Haberle) has no interest in pursuing this line of inquiry. In fact, she’s disgusted by her daughter’s Holocaust fixation and sees the preoccupation as macabre. Her goal is to persuade her daughter to forget the War, move into the 21st century, and become a successful doctor. Toward that end she relentlessly badgers Shaina to give up her morbid concern with dead Jews and murderers.

But has she, herself, been able to put the past behind her? As the play unfolds, the Holocaust’s impact on Renee is revealed, illustrating the ripple effect of trauma as it is transmitted from parent to child. Suffice it to say, demons born of Hitler’s reign play a role in her life, as well.

Throughout Eavesdropping on Dreams, the ghost of Uncle Yakov (Mike Shapiro) hovers on stage. Every so often, he adds a bit of factual data to the family saga. For example, he reports, on September 14, 1942, 15,000 people were taken from the Ghetto. “Why and where remains a mystery,” he says. Although Yakov’s Yiddish accent is inauthentic, his ghost is a literal illustration of the Holocaust’s lingering shadow. What’s more, the history lessons serve to remind viewers that the Eberkohn family was not singled out. Instead, by virtue of their heritage they, like most French, German, Hungarian, Polish, Romanian, and Russian Jews, were chosen for genocide.

That said, Eavesdropping on Dreams works because it is so narrowly focused, zooming in on the damage wrought by corrosive, festering secrets. It’s a subject that playwright Bekerman-Greenberg obviously knows well. A psychotherapist born in a post-war refugee camp, she has crafted an intensely moving play that never descends into maudlin overstatement. Instead, it movingly addresses the ways trauma is carried between generations.

Needless to say, the audience’s tears flow freely throughout the play, but they are not only tears of fury, they’re tears of relief.  Indeed, the play reminds us that it’s never too late for buried truths to be revealed or silences broken.

(Eavesdropping on Dreams plays at the Cherry Lane Theatre, 39 Commerce Street, through May 19, 2012. Performances are Wednesdays through Fridays at 7PM; Saturdays at 2PM and 7PM; and Sundays at 2PM. There will also be a special performance on Tuesday, May 15th at 7PM. Tickets are $35; $25 for seniors and students. They can be purchased at barefoottheatrecompany.org or by calling 212.352.3101. For more show info visit barefoottheatrecompany.org.)