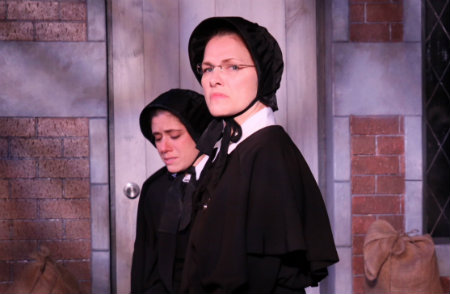 BOTTOM LINE: Heard about this play? Missed it on Broadway and at the movies? Now's your chance to check it out (thanks, T. Schreiber!).

John Patrick Shanley is the quintessential New York playwright. His best known works include such slices of city life as Savage in Limbo and Women of Manhattan, and he won an Oscar in 1987 for writing the screenplay for Moonstruck (“Snap out of it!”). He continued to enjoy off Broadway success throughout the 1990s, but in 2005, his play Doubt: A Parable finally got him to Broadway and won him a Tony Award and a Pulitzer Prize. When you see it, it’s not hard to understand why. T. Schreiber Studio & Theater provides that opportunity in its current production, its sixth staging of a Shanley play.

Like many of Shanley’s works, Doubt is set in the Bronx in a working-class Catholic community. This time, he goes into the church itself, focusing on the power struggles waged on the grounds of a parochial middle school. It’s 1964, and Sister Aloysius, the stern school principal, isn’t sure what to make of Father Flynn, the progressive parish priest who teaches basketball and is well liked by the students. Sister James, a young teacher, sees nothing wrong with Flynn’s conduct, but admits she did witness something odd between Flynn and Donald Muller, the school’s first and only black student. Sister Aloysius vows to get to the bottom of Father Flynn’s relationship with Donald.

Doubt unfolds over a taut 90 minutes and is performed by a cast of four. It touches on the civil rights movement, the secularization of American culture, the church’s institutional sexism, and, of course, the scourge of child sexual abuse by clergy. Despite that heavy subject matter, the play also contains moments of humor, such as the scene in which Sister Aloysius and Father Flynn argue about whether “Frosty the Snowman” is harmless fun or a glorification of paganism. Aloysius is a fascinating character — a nun who took her vows after being widowed, a strict disciplinarian but through and through an educator. In her traditional Sisters of Charity habit, there is nothing soft about her. She’s not as “fun” as Father Flynn or as sweet as Sister James, but is she wrong about the priest’s conduct? Shanley keeps us guessing until the very end...and beyond.

The original production of Doubt not only won awards for playwright Shanley, but also for its cast, all of whom were nominated for Tonys (two won). Then it was adapted for the screen, where all four principal cast members were nominated for Oscars. This script is a gift for actors. However, it can also be a curse, considering the illustrious performers who originated the roles on stage and screen (Cherry Jones played Aloysius on Broadway, Meryl Streep on film). In T. Schrieber’s staging, directed by Peter Jensen (who guided a huge cast to award-winning heights in 2010’s Balm in Gilead), I was most impressed with Nora Jane Williams, playing the potentially thankless role of Sister James. In some ways she functions as an audience surrogate, torn between the formidable Sister Aloysius and the charming Father Flynn. As Aloysius, Alice Barrett Mitchell initially scores laughs with her no-nonsense demeanor, but as the drama escalates, she shows not only the character’s steely strength but also her humanity.

T. Schreiber’s Doubt doesn’t bring anything radical or unexpected to Shanley’s simple but dramatically rich script; however, for those New Yorkers who missed it back in 2005, this is a chance to see what all the fuss was (rightly) about. Sure, you could rent the movie, but a play — even one written by an Oscar-winning screenwriter — needs to be seen on stage for its value to be fully known. John Patrick Shanley started out on the New York stage, and hopefully he’ll always come back here.