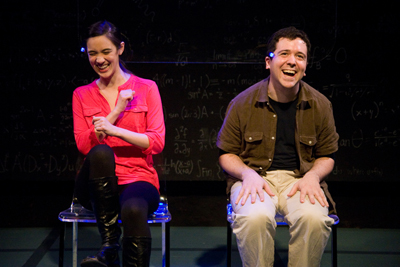 BOTTOM LINE: A complex and engaging new play that satisfies both brain hemispheres.

Science nerds, your time at the theatre has arrived, and August Schulenburg will be your Captain Kirk. Though I am admittedly not neuroscientifically inclined, I was not at all confused watching Deinde, and I actually probably learned a thing or two about our scientific capabilities. Deinde isn't just about science. It's also about scientists. And they are people. And they fall in love, make cheesy jokes, and fear the future just like the rest of us.

In Schulenburg's new play, which takes place in the somewhat distant future, a team of scientists attempts to find a cure for a deadly virus that threatens the human race. When a Russian colleague, Daniel (Matthew Trumbull), presents a possible -- though mostly untested -- solution, the old guard remains cautious while the younger scientists jump right in. The Russian briefs the team on a list of do's and don'ts, and as dramatic development usually dictates, rules are introduced so they can then be broken. As the overeager scientists try out the device and become sort of hyperaware cyborgs, the bend the rules they were explicitly told not to break. Not so shockingly, things go awry.

“Deinde” refers to a mechanism that lets the scientists sort of journey inside their minds, to become smarter and better apt at research, thus finding a cure for the virus at a speedier pace. But this internal recognition makes them feel things that much stronger, so normal emotions are amplified when the scientists are "under the influence," as it were. As the eager Jenni (Rachael Hip-Flores) and Mac (Isaiah Tanenbaum) explore Deinde's offerings, they get hooked. Like, heroin hooked.

Deinde, though funny, is more drama than comedy. It is comfortably situated within the expected sci-fi sensibility, with a grave tone that could easily venture into camp or satire, but never, ever does. And when it gets life-or-death serious (as it does on a couple of occasions), there's even a melodramatic tone to the narrative as everything is at stake in these desperate moments. We are meant to invest in these characters, and, as portrayed by a game group of performers, it’s easy to care. Malcom (Ken Glickfeld), the seasoned scientist, is skeptical of Deinde and risks his job by voicing concern; Nabanita (Nitya Vidyasagar), the lead scientist, tries to maintain peace in the lab while grappling with her own unease; Cooper (David Ian Lee) is tormented by the feelings he's having for Nabanita while his wife Dara (Alyssa Simon) is dying from the virus he is unsuccessfully trying to cure. Jenni's relationship problems with girlfriend Mindy (Sol Marina Crespo) increase as Deinde makes her disengage from reality. And Mac's amplified emotions make his anger completely out of control.

A lot of action occurs in Deinde, and its 2 hour 30 minute run time is filled with unfolding drama. Act I is the scientific portion of the evening, and Act II delves into personal territory (the term "Deinde" is barely mentioned in the second act). With much to wrap your head around -- and with both sides of your brain equally engaged -- Deinde provides a totally stimulating tale. Director Heather Cohn does sharp work manuevering her cast of 9 throughout Schulenburg's speedy scenes. The set's plexiglass aesthetic (cleanly designed by Will Lowry) assists in the fluidity of the narrative and offers an appropriate sterility to the lab. For science geeks and others, Deinde is a clever amalgamation of science fiction and theatre.