By Gary Duggan; Directed by Chris Henry
Original music by Anthony Rapp and Daniel A. Weiss 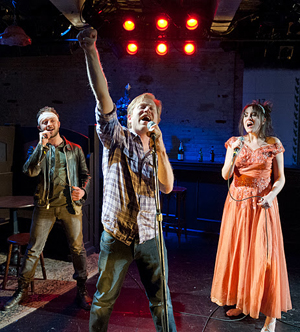 BOTTOM LINE: A smart, dark, and edgy holiday tale with three incredible performances, rock music, dancing, hooking up and deception. What more could you want?

Dedalus Lounge is a new play by Irish playwright, Gary Duggan, which had a successful run at the Dublin Fringe Festival several years ago and now is making its American debut, complete with a musical face lift by Anthony Rapp and Daniel A. Weiss. This darkly, charming tale takes place during the days before and after the holiday season in a small pub (Dedalus Lounge) in working-class Ireland where the lives of three long-time friends come to a boiling point surrounding the dramas of family and personal struggles as well as dealing with the issues of growing older and facing their ever evolving and complicated relationships. Danny (Anthony Rapp) is trying to get a Queen tribute band off the ground while his personal life is slowly crumbling apart around him; Delphine (Dee Roscioli) is involved in a high proﬁle affair and the fact that her grandma is dying; and Daragh (James Kautz) is a mysterious drifter dealing with his own dark bag of tricks.

Based on the brief description I had read about Dedalus Lounge, I went to Interarts, which incidentally is one of my favorite performance spaces in Midtown, thinking I was going to see a typical story of three friends sitting around drinking and waxing poetic about life. These conceptions were almost instantly shattered when I was greeted with an interpretive dance of sorts, complete with dry ice smoke effects, which segued into a rousing rock anthem performed a la Freddie Mercury by Rapp. I was thrilled since I, like many, have been a fan of Mr. Rapp's since he originated the iconic role of Mark in the original off Broadway and Broadway companies of Rent. As Danny, he attacks all of his musical numbers with the bravado and swagger of a rock star, reminding us why he is a musical theatre rock icon. His acting is also quite strong and at times heartbreaking as he depicts a shy, slightly weak man struggling to ﬁnd happiness and claim what it is he truly wants in life. It reminded me of the deeply personal performance he gave several years ago at Ars Nova in his one man show, Without You.

Rapp is not alone in his standout performance. Roscioli and Kautz are equally impressive. Dee Roscioli is understated, yet conﬁdent as the ﬂawed and lovable Delphine. Also no stranger to iconic roles, she has the distinction of having played the belt-tastic role of Elphaba in the musical Wicked more than any other actress in both the Broadway and national touring companies. Finally, Indie Theatre up-and-coming cult favorite, James Kautz, keeps you guessing as the mysterious Daragh. Kautz, one of the founders of the uber awesome Amoralist Theatre Company, delivers another knockout performance in this piece that echos his successful turn in the hugely successful underground hit The PIed Pipers of The Lower East Side.

Dedalus Lounge is smartly directed Chris Henry and has some very interesting choreography by JoAnn Hunter. While the script isnʼt perfect, the three stellar performances by the very capable cast far outshine any small problems with the script. There are a ton of twists and turns that keep you guessing in this darkly comic tale of desperation, casual sex, grieving, bisexuality, rampant disloyalty, Guinness, Jager, and Freddie Mercury impersonations. Dedalus Lounge is a sleek, hip play that I know will thrill audience of edgy downtown theatre, but with a midtown sophistication. Itʼs off beat. Itʼs cool. Itʼs dark. Itʼs original.