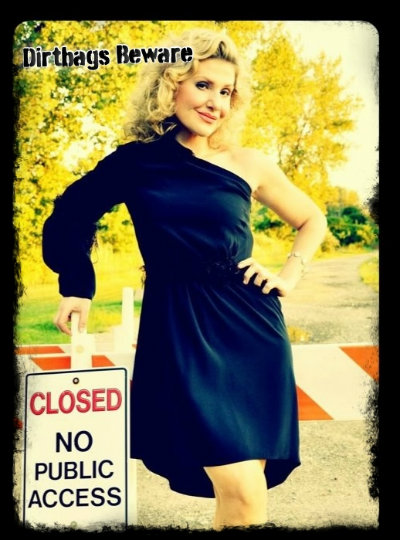 BOTTOM LINE: This sometimes touching, sometimes raunchy comedy tells the humorous story of one woman's disastrous marriage and her recovery.

Elza Zagreda’s one-woman show Dating, Depression and Dirtbags: A Love Story isn’t so much about dating as it is about one dirtbag in particular: her ex-husband who had a penchant for cheating on her with call girls. (Zagreda refers to him simply as “dirtbag or DB” due to “legal reasons.”)  The play opens with Zagreda giving a rundown of her disastrous and trashy wedding, playing upon both the cultural stereotypes of her own Albanian family and her husband’s Hispanic family and friends, showing both groups to have tendencies towards drama and violence. Initially, the two have a pleasant marriage, punctured only by the meddling of their mothers who fret over them not yet producing grandchildren. Zagreda shows her knack for taking on different personas as she jumps from her impression of her nosy mother to her overly cheery Brazilian gynecologist, who delivers news of an impending miscarriage and uterine fibroids with a gigantic grin.

Disaster hits when Zagreda overhears her hubby whispering “mi amor” into the phone one night, leading her to suspect that he might be having an affair. Sure enough, when the phone rings shortly after, Zagreda uncovers the truth: that her husband has had a girlfriend on the side for eight months. What follows suit is heavy drinking and the tossing of heavy objects as the two attempt to still cohabitate despite the infidelity. (Zagreda notes that Bailey’s is a perfect way to start the day as it has all the necessary nutrients, “fat, sugar, alcohol, and caffeine.”)  She finally forgives him until he pocket dials her while on a date with a call girl, and proves that his infidelity is a damaging pattern rather than one simple mistake.

In the end her husband is the one who leaves, realizing that he has a problem and is incapable of fidelity. Zagreda attempts to piece her life back together, engaging in internet dating and giving authentically humorous accounts of the creeps she engages with. Zagreda’s brief chronicles of dating woes are among the funniest and most quip-filled moments in the play, and I found myself wanting to hear more.

Zagreda has an appealing and commanding stage presence and her stories are charmingly self-deprecating. She shows that her acting talents extend past the comedic, as her moments of distress and heartbreak are both touching and convincing. Her high energy level and physical agility help her keep the audience engaged in her story.

The show’s only shortcoming the night I attended was the acoustics, as Zagreda's voice was drowned out by both a loud air conditioner as well as rude audience members. Some of her funniest and raunchiest jokes are also too quickly rushed through or not delivered with enough volume, so that the full effect of their comedic power is diminished. Dating, Depression and Dirtbags has a compelling story and an amusing script, and with a louder and slightly more streamlined delivery it would be sure to leave any audience in stitches. Most likely any woman (or perhaps man) who has had to deal with their own romantic woes will identify with Zagreda’s humorous story of journeying towards inner strength and recovery. Those recovering from their own heartbreak will find catharsis in the show’s humor and authenticity