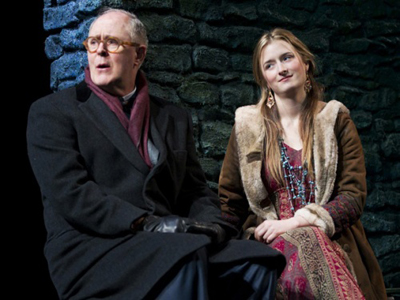 John Lithgow and Grace Gummer in THE COLUMNIST. Photo by Joan Marcus.

BOTTOM LINE: A historical portrait informs of an interesting time in America; though not always dramatically compelling, there is much to enjoy from The Columnist.

The Columnist is more or less a character study based on a real person, one Joseph Alsop, journalist and socialite in the mid-20th century. From the reactions of audience members around me, I gather you get more from this play if you lived during the Cold War, particularly the years on either side of JFK’s presidency. I admittedly felt a handful of references go over my sadly naïve head.

John Lithgow plays the multi-faceted Alsop, a hard-working slave to political journalism who understands the importance of a rock-solid reputation. Alsop is also a closeted homosexual -- it is the early 1960s, after all. When a KGB set-up results in the leak of some compromising photos, Alsop’s integrity is on the line. Alsop’s brother Stewart (Boyd Gaines) does his best to come to his one time collaborator’s aide, but neither Alsop brother is getting on particularly well with the younger journalists and more is at stake than sexual identity.

At home, Joe Alsop feigns normalcy, marrying his good friend, the recently divorced Susan (Margaret Colin) and becoming step-father to her teenage daughter Abigail (Grace Gummer). As the 1950s turn into the 1960s, we see the era shift through Abigail -- first her wardrobe, and then her political allegiances. Much to the chagrin of her step-dad, she becomes a hippie, and one who protests the war in Vietnam, at that.

Though Alsop is a fascinating character, particularly at the height of his career in a riveting time in global politics, he is not wholly likeable. Misogyny and ego guide his interactions with others, and a short fuse adds to this disagreeable nature. It’s hard to sympathize with him. Lithgow does remarkable work exposing Alsop’s layers, but what’s deep down isn’t any more desirable than what appears on the surface. Empathy toward him does not come naturally.

While The Columnist doesn’t necessarily hook you with its narrative (much of the action happens off stage), David Auburn’s sincere script offers a glimpse into an engaging period in the not-too-distant past. The gifted cast invigorates their internally motivated characters under Daniel Sullivan’s crystal clear direction. And as Manhattan Theatre Club shows tend to offer crisp production values, The Columnist includes a grand design scheme worthy of Alsop and co.

(The Columnist plays at the Samuel J. Friedman Theatre, 261 West 47th Street, in a limited engagement through June 24, 2012. Performances are Tuesdays at 7PM; Wednesdays at 2PM and 7PM; Thursdays and Fridays at 8PM; Saturdays at 2PM and 8PM and Sundays at 2PM. Tickets are $67-$121. For tickets and more info visit thecolumnistbroadway.com.)