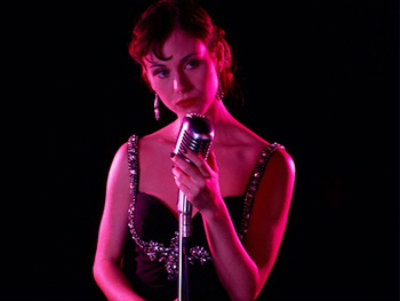 Kristen Martin as Crystal La Belle in THE CITY CLUB.

So before I start raving about The City Club, its wonderful music and the beautiful cast, I think it's appropriate to mention that I am infected with what Woody Allen recently described in Midnight in Paris as “Golden Age Syndrome.” Give a time period a few decades and I’ll idealize it, filter out the negatives and think it the most wonderful time in history. And so it happens with the 1930s, the decade in which The City Club transpires. Ignore the Great Depression, the institutionalized racism and post-prohibition decadence and corruption. Instead, I’ll paint you a picture of long-legged cabaret dancers in sparkling costumes, smoky bars with men in perfect suits and a reinvigorated and seductive jazz and blues scene which arguably was one of the most seminal of the 20th century. That’s my 1930s, and to my joy, that’s the 1930s presented in The City Club.

The City Club, a classy den for music lovers, is the embodied dream of Chaz Davenport (Andrew Pandaleon), the heir of a family mafia that has been controlling the city for generations through “the committee.” Chaz seems to have been shielded from the more hands-on approach of the committee, and is presented as a naïve dreamer, unfamiliar and uncomfortable with his family’s ways of repression and violence. Stoked with a passion for music and a desire to give back to the city, Chaz opens The City Club with his late father’s great wealth, a place laden with the best and most beautiful in the jazz and blues scene of the time. For Chaz, musical genius is the defining trait of any human being, more so than social status or race, and so he does not hesitate to hire an African American piano player or to bring in girls “from the wrong side of the tracks.” However, his dreams will soon be shattered by some ill advised partnerships and the inescapable realities of being the son of a Mafioso.

The performances, the choreography and the score of this musical are a real treat for the audience. Seductive jazz numbers are followed by playful songs by the stunning trio-in-residence, Rose, Lily and Candy (played by Autumn Guzzardi, Kaitlin Mesh and Emily Tyra respectively) who provide the show’s main quota of “sexiness”. Parker, played by Kenny Brawner, is the African American piano player and blues singer extraordinaire, whose voice is magical in setting the scene as things take a twist for the worse in Chaz’s ideal dream world. Kristen Martin is Crystal La Belle, the girl with the difficult background who strives to re-conquer Chaz’s heart and who delivers some heart-wrenching and emotional pieces with an incredibly powerful voice, something surprising given her small stature and frame. Even I, an engineer completely devoid of any sense of fashion, noticed that the costumes in the show were absolutely spectacular, to the credit of David C. Woolard.

As the club becomes the focus of his enemies’ evil plots, our idealistic hero finds that his late night den has become a place where drugs and hard liquor fuel treachery and manipulation. And it’s during this transformation where I have my only criticism to the piece. While the score is wonderful and the sentiments transmitted in the songs seemingly genuine, the acting out of the main story in between the musical numbers often comes across as rigid and without enough character depth to make those interactions even somewhat credible. And while the main element of a musical can, of course, be the music, I still think the interaction among characters could have been sharper and more polished.

The City Club is a wonderful and entertaining musical that will have you playfully tapping your feet and gawking in amazement in equal measures. I can easily imagine this show eventually arriving on Broadway, where it would benefit from a slightly bigger stage (some of those long legs were being tossed around frightfully close to the casts’ faces). If you enjoy a good old fashioned musical with plenty of jazz, swing and blues, head on downtown to see this show.

(The City Club opens at the Minetta Lane Theatre at 18 Minetta Lane. Performances are Tuesdays at 7PM; Wednesdays through Fridays at 8PM; Saturdays at 3PM and 8PM; and Sundays at 3PM and 7PM. Tickets are $55-$90 ($25 rush on the day for a box office ticket with valid student ID). To purchase tickets visit TicketMaster or call 1-877-250-2929)