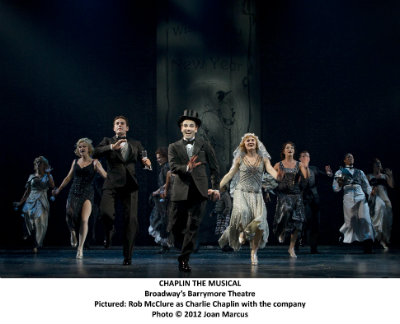 BOTTOM LINE: Chaplin is a smart, compelling musical about the biggest star in silent pictures.

Charlie Chaplin broke box office and divorce records in his soaring career that defined stardom and the motion picture industry. The biggest name in movies, Chaplin revolutionized the burgeoning film business and helped bring moving pictures from a novelty to an international enterprise. But unlike other silent film stars, it wasn’t the talkies that ended his career, it was politics.

For Chaplin, Christopher Curtis (music, lyrics, and book) collaborates with prolific book writer Thomas Meehan (Annie, Hairspray, The Producers) to engage this infamous figure and draw on the psychology of his childhood and his relationship with his mother to explain the actions Chaplin took throughout his career and life. Chaplin’s father was a drunken louse and his mother developed dementia at an early age. The main narrative centers on Chaplin’s years as a filmmaker, but constantly glimpses back to boyhood moments where his parents shaped his life and his art. And while the musical takes stock of his personal life, focusing on two of his four marriages, the predominant concern is his creativity — how inspired he was, how creative his movies, and how indomitable his talent.

Director/Choreographer Warren Carlyle (Hugh Jackman: Back on Broadway) uses elegant staging and understated but stylistically ingenious movement to fluidly guide the audience from film shoots to parties and from present reality to memories. Aiding this fluidity are the wagons and turntables that underlie the versatile set by Beowulf Boritt (Scottsboro Boys). Carlyle takes advantage of the Hollywood setting to employ a convention of announcing scenes like movie shoots and of employing and crossing narrative with fabulous video projections designed by Jon Driscoll (Ghost the Musical). The show as a whole is beautifully done with all the finesse one expects from Carlyle. This delicacy is matched by Amy Clark and Martin Pakledinaz’s (Nice Work if You Can Get It) clever use of color in the stylish costume design. Along with a pronounced “filming” make-up, the palette for the clothing draws from subtle grays, browns, etc to give the impression of a black and white movie until the final moment, when in a glorious effect the characters’s coloring shifts to a sepia tone and then full, finale-style Technicolor! (with the aid of Ken Billington’s (Chicago) sophisticated lighting, of course).

Chaplin isn’t a sensation, but it’s solid. The direction and design are extraordinarily thoughtful and the performances are uniformly top-notch. The score and script will move you and make you laugh, and you’ll be glad you saw it. Not a must see, perhaps, but distinctly one of the better things on Broadway right now.

(Chaplin plays at the Ethel Barrymore Theatre, 243 West 47th Street, between Broadway and 8th Avenue, in an open run. Performances are Tuesdays and Thursdays at 7PM; Wednesdays at 2PM and 7:30PM; Fridays at 8PM; Saturdays at 2PM and 8PM; and Sundays at 3PM. Tickets are $66.50 - $135.50 and are available at telecharge.com. For more show info visit chaplinbroadway.com.)