Written and Directed by Chris March

Off Broadway, New Dance Production
Runs through 12.29.12
HERE, 145 Avenue of the Americas 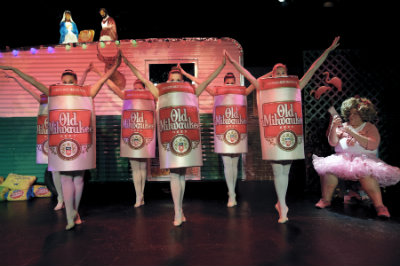 Chris March’s Butt-Cracker Suite puts a new spin on the classic holiday tale The Nutcracker. This time, the ballet is set in an American trailer park, creating a mix of the highbrow and lowbrow as ballerinas dance in tutus and Spam t-shirts while the little girl at the heart of the play, Clara, spins on a giant Spam box; the ballerinas later pirouette with boxes of spam which they eventually wear as hats.

Like the story upon which it is based, Butt-Cracker Suite's different dance numbers are loosely connected to the narrative of a little girl's Christmas wish. In this rendition, Clara (played by Chris March himself, who resembles a sort of overgrown Honey Boo-Boo) desperately wants ballet shoes, while her mother suggests she learn a more practical form of dance such as the variety involving a pole. The ballet merges a Christmas theme together with a white trash/Americana theme, creating numerous dance numbers celebrating trashy products, including the aforementioned Spam, Miracle Whip, a six-pack of Old Milwaukee beer, among others. This theme reaches its apex during a stunning number in which dancers dance backwards to give the effect of being a flock of glow-in-the-dark pink flamingos. In a sweetly funny Christmas-y number, each of the ballerinas dons an ugly Christmas sweater, eventually lighting themselves up with Christmas lights. Each one of the show’s eight talented dancers maintains constant enthusiasm and energy, which creates an infectious sense of joy. The stage is also well lit with festive red colors, evocative of a holiday mood (the lighting designer is Jennyb of Shady Lady Lighting).

Bravo channel watchers will be familiar with the off-the-wall personality and designs of Chris March, who has been featured on the shows Project Runway and Mad Fashion. However, considering the fact that March turned heads on Project Runway for debuting unusual fashions that utilized human hair, the costumes and designs used during the ballet seem a bit tame overall. Clara’s mother (Sara Brophy) comes on stage wearing beer can curlers, bright leopard prints, and electric blue heels, but this offering of wonderfully trashy eye candy doesn’t reappear again until the visually stunning pink flamingo dance number. I found myself waiting for John Waters-esque ensembles but found only a smattering of obscure designs.

In between dance numbers, differing video clips are projected onto the trailer wall that takes up most of the stage. The clips include snippets of Christmas movies, a Saturday Night Live animation clip, the original commercials for the trashy products featured, and a clip of John Waters’ Divine knocking over a Christmas Tree due to not getting her desired “cha-cha” shoes (an obvious inspiration for Clara).

The storyline of Butt-Cracker Suite could perhaps be strengthened, as the original work upon which it is based connects more of the dance numbers to an overall narrative. I wanted to see development in Clara’s story. The dance numbers are the most appealing when they include bits of dialogue, and including more of this would have made the numbers more engaging and provided more variety.

Overall, however, the show offers a cute way to celebrate the holiday season. Even though it is intended for adults, it's quite suitable for older kids and teenagers. Perhaps parents who are sick of dragging their children to the same tired and clichéd renditions of The Nutcracker can find Butt-Cracker Suite to be a nice way to change things up as it features the same feeling of holiday wonderment mixed with enough of an ironic wink to make it entertaining for all audience members.