$20 ($30 for a double feature) and are available at smarttix.com

Bride of the Monster

Adapted and Directed by Frank Cwiklik
Produced by DMTheatrics as part of Final Curtain: The Last of Ed Wood
Presented by Horse Trade Theater Group 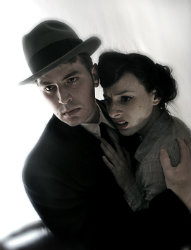 Joshua B. Schwartz and Lindsey Carter in BRIDE OF THE MONSTER. Photo by Frank Cwiklik.

BOTTOM LINE: This totally unnecessary stage adaptation of an awful 1950s monster flick will amuse and fascinate you, especially if you have a soft spot for filmmaker Edward D. Wood, Jr., the “Worst Director of All Time.”

So considering how many terrible films have been made in the history of filmmaking, I must ask the question: why are people so obsessed with the terrible films made by Ed Wood? He seems to occupy a special place in the pantheon of bad filmmakers. Perhaps it’s because he was “definitively” named Worst Director of All Time by critic Michael Medved, or because Johnny Depp played him in an Oscar-winning bio-pic directed by Tim Burton. Or maybe it’s because his cinematic obsessions (monsters, aliens, nuclear radiation, the LAPD, and angora sweaters) combine with his profound directorial incompetence to produce films so bizarre that people can’t look away, like at a traffic accident.

The good people of DMTheatrics, led by Frank Cwiklik, have upped the ante on Wood’s weirdness, presenting many of his movies as live stage performances around New York City over the last decade. However, they swear that they will never, ever do this again, so if you’re feeling the need for B-movie nuttiness and smut presented IN YOUR FACE, head to the Red Room for Final Curtain: The Last of Ed Wood before it ends July 1st. The festival includes some of Wood’s lesser-known works, such as the thriller The Sinister Urge and exploitation flick The Violent Years, as well as the “classic” Bride of the Monster (released to no acclaim in 1956), which features the final speaking role of the down-and-out Dracula star Bela Lugosi. (Sorry, no Plan 9 from Outer Space this time around, kids.)

The stage version of Bride of the Monster heightens the absurdity of the original, first of all by simply existing, and second by putting the action smack in front of us in the teeny-tiny Red Room play space. The plot centers on a mad scientist who is attempting to create “a race of atomic supermen,” with assistance from a giant mute sidekick and a killer octopus. Standout cast members include Brianna Tyson as an exasperated police chief, Craig Kelton Peterson as the scientist’s creepy rival/admirer, and Ivy Hong as a super-bored secretary. The story’s many locations are rendered simply but cleverly with the use of a sliding curtain and a video projector, and the fight choreography is much better than one expects in a show this silly. Bride of the Monster includes some of Wood’s most ridiculous dialogue (“He tampered in God’s domain!”), which the cast does an admirable job of uttering without losing it.

I’m not certain that this production answers the question of “Why Ed Wood?,” unless the answer is, “Why not?” That certainly seems to have been Wood’s philosophy of filmmaking — why not write, direct, and star in a movie about his own love of cross-dressing? Why not incorporate footage of the deceased Lugosi wearing a vampire costume into a film about a space invasion? Why not continue making movies for twenty-five years despite never showing any improvement as a writer or director? Like Bride’s mad scientist, Wood had a vision and was sticking with it; Frank Cwiklik and crew are doing the same…until July, anyway.