Written and Performed by Jessica Sherr; Directed by Susan Campanaro 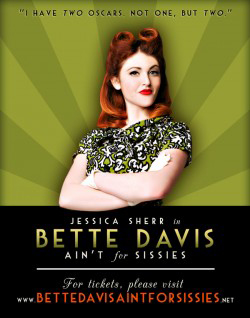 BOTTOM LINE: A fast-moving, well-written and compelling look at Bette Davis’s early career that pays keen attention to the industry’s sexism as well as the actor’s insecurities and angst.

Jessica Sherr’s Bette Davis Ain’t for Sissies opens on the eve of the 1939 Academy Awards. Davis — who was then thirty — has been nominated for her starring role in Dark Victory, but journalists have leaked word that the golden statue will go to Vivian Leigh for her portrayal of Scarlet O’Hara in Gone with the Wind. Davis is irate and, in a huff, storms out of the star-studded event. “Why stay if I know I’m not going to win?” she arrogantly shrugs. As the play opens she is pacing her apartment and is clearly agitated.

Sherr’s evocative performance, which won raves at the 15th Annual NY Fringe Festival in 2011, not only captures Davis’s rage, but also looks beneath the surface to convey the performer’s ongoing anxieties, insecurities and dreams. After all, she’s still fairly young and has to continually struggle to win good roles. “I’m not as pretty as the other girls,” she says at one point. “I am not Hollywood beautiful. It is very lonely here. I hate California.” The Lowell, Massachusetts native also resents the blatant, ever-present, sexism of studio execs, directors, and casting agents. “They want to screen test my legs,” she rants. “Do you think they test Cary Grant’s legs? I feel like a slut.”

Later, Davis rails at soon-to-be ex-husband Harmon “Ham” Nelson about the gender disparities governing their love life. “You’re married to a box-office sensation,” she yells. “And I am married to an unemployed musician. Where is your future? You have it so good, all thanks to me.” Her feminist assessment is spot on: Ham resents that his wife earns many times what he does and his wounded ego has fractured their union. Small wonder that the relationship sputtered and eventually died.

But Bette Davis Ain’t for Sissies is more than an inside peak into the sexual politics and career aspirations of the storied actor, and the hour-long production elucidates numerous transitions in Davis’s career, including her 1936 attempt to sever her contract with Warner Brothers and her dismissal from Universal Studios. While those in the know will find such details engrossing, those with little prior knowledge of the actress’s history may miss some of the references. Still, this is a small criticism. Overall, Sherr projects Davis’s passion with sass and wit. There are many sharp rejoinders — digs at rivals and colleagues including Douglas Fairbanks, Olivia de Havilland, Errol Flynn and Universal studio head Carol Laemmle — but Davis’s drive to succeed is what shines through. As she tells de Havilland, “You have to fight for what you believe, otherwise, you’ll always be chasing your tail.”

(Bette Davis Ain’t for Sissies will be performed at Stage 72 — formerly called The Triad Theater — 158 West 72nd Street, through January 9, 2013. Remaining performances are January 4th and January 9th at 7PM. Tickets are $15 but the theater requires audience members to buy two drinks which range in price from $7-$14. To purchase tickets visit http://brownpapertickets.com. For more show info visit bettedavisaintforsissies.net.)