Adapted and directed by Julie Kramer 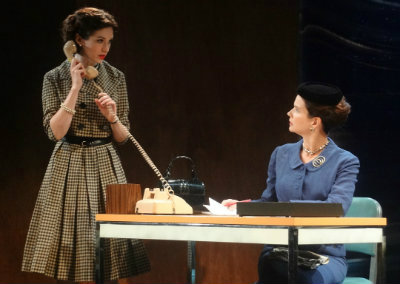 Sarah Wilson and Amy Wilson in THE BEST OF EVERYTHING.

BOTTOM LINE: This stage adaptation of this classic 1950s novel is both enthralling and humorous, offering a glimpse of the gender (in)equalities of that era.

The Best of Everything is based on the 1958 novel by Rona Jaffe which explored the lives of Manhattan secretaries in the 1950s trying to find fulfillment both professionally and romantically. As dated at the play is, the themes and situations bear resemblance to those one might see in an episode of Sex and the City as women today still struggle to achieve as much professionally as their male peers and question whether it is possible to have a successful career while still being a wife and a mother.

At the center of the play is Caroline (Sarah Wilson), a young woman who hopes that her freshly printed Radcliffe degree in English might pay off, though she’s had to augment it with some typing courses to gain a lowly secretary position at a publishing company. The notion of focusing on her career is a recent change in mindset for her, one she’s only turned to after being abandoned by her former fiancé Eddie (Jordan Geiger), who cast her aside for the daughter of Dallas aristocrats. Heartbroken, Caroline throws herself into her work as she provides clerical support for the unfriendly and demanding Miss Farrow (Amy Wilson). The office gossip Mary Agnes and April (embodied perfectly by the cherub faced, Monroe-esque Alicia Sable) provide her support and give her room to voice her concerns about her romantic and sexual options now that she is yet again single. While some of the women in the office simply see their jobs as a way to pass the time and pay their bills until they are married, others see the work as a road to a real career. Miss Farrow tells Caroline that she will have to decide which group she falls into and lets her know that having a career in the company may mean having an affair with one of the men in the company. Caroline does indeed catch the attention of two of the main men, Mr. Rice and Mr. Shalimar (both characters are performed by the obviously talented Tom O’Keefe). Mr. Rice’s disillusionment pulls Caroline in and the two begin what is at first strictly an “affair of the mind,” while the creepy Mr. Shalimar expects to be repaid sexually for the help he provides Caroline professionally.

Considering the fact that the original novel was also adapted into a well-known film starring Joan Crawford, one would most likely expect there to be plenty of parody and campiness worked into this contemporary production.  For the most part, the script is served up with straightforward earnestness, although there is a bit of intentional sarcasm embedded in the way several of the lines are delivered, as though the performers are winking at the audience and asking, “Can you believe how naïve they were in 1958?” This self-consciousness creates a bit of a distance from the characters with the exception of Gregg  (Hayley Treider), an actress whose hungry pursuit of a more famous paramour, who is flippant with his affection, consumes her and eventually leads to her demise. Treider’s performance is one of utter sincerity and nuanced emotion.

A group of potential suitors that arrive to the company Christmas party also adds a comical tone to the party, as they are played by giant paper cut outs rather than actual actors. Besides being economical, the paper cutouts also serve to convey how one dimensional and identical the women’s potential suitors are. Rather than finding individuals they can connect with on a deep level, the women simply meet men to fill in the generic role of boyfriend and future husband, each one being the same means to an end as the last.

Overall, this production is a thoroughly engaging and spirited one, capturing what it meant to be a woman in the 1950s. Jaffe’s story asks if women can really have the best of everything, and serves up the answer that they can have the best of some things if they avoid the pitfalls along the way. These pitfalls usually turn out to be focusing too much energy and time on men and marriage, or falling into the clutches of a sexually predatory male. A skilled cast and director, combined with a set reflective of the period designed by Lauren Helpern, as well as authentic costumes created by Daniel Urlie, make this an enjoyable work to behold.