As Wide As I Can See

By Mark Snyder; Directed by Dan Horrigan
Produced by At Hand Theatre Company 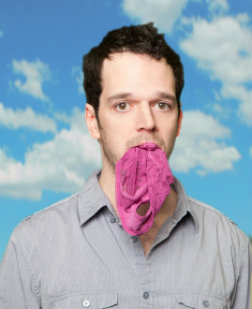 Ryan Barry in AS WIDE AS I CAN SEE.

BOTTOM LINE: A clever script, a talented cast, and a skilled director make this story of friends stuck in a recession-ridden Ohio town both enthralling and convincing.

Those of us who finished college in recession-ridden America found ourselves graduating into a situation very different from that which our parents experienced. While our parents more or less exited college into a world where a college degree could ensure a job and future, we found ourselves entering a world in which a college degree and even experience won’t guarantee anything. Whatever dreams, ambitions or talents we had as students withered in the face of an uncertain job market where once vibrant industries are now dying out. This difficult situation is at the heart of At Hand Theatre Company's production As Wide As I Can See takes place in a small Ohio town that has been hit hard by the recession, leaving the characters at the center of the play listless and directionless. The newly thirty Dean (Ryan Barry) leaves his beat reporting gig in Chicago to chase an opportunity running a local paper in his small hometown in Ohio. Shortly after sacrificing his life to return, Dean is fired. This leaves him lost and listless in a town he isn’t sure he wants to be in. Holding things together is his girlfriend Jessica (Julie Leedes), a woman who has decided to make the most of her life, working her way up to head waitress and buying a small home. Dean’s best friend from high school, Tyler (Joshua Levine) isn’t finding much success in life either and lives in an RV parked in the back of Jessica’s house with his girlfriend Nan (Kay Capasso) and their two baby girls.

Losing his job seems to have left Dean questioning his manhood and feeling intimidated by Jessica, whose life is as steady and reliable as clockwork. She leaves the job page open while she dashes off to her job, begging him to find any new professional direction. This uncertainty seems to have affected their sexual relationship as well. After dating for a year, Dean and Jessica still have trouble communicating their sexual needs. In an especially humorous scene, Jessica confronts Dean about their unusual morning sex in which Dean ripped off Jessica’s panties and stuffed them in his mouth. Rather than feeling aroused by the act, Jessica feels confused by just what Dean’s deeper desires might be. Later when Dean is caught with Jessica’s thong in his pocket she insists that Dean put on the panties, since that must be what he really wants to do, without giving Dean room to decide what he really wants.

Later, when Dean’s overachieving high school friend Charlotte (Melisa Breiner-Sanders) appears, it leads to Dean fretting over his own ambition, that is until Charlotte reveals her own shortcomings. As the two excavate buried secrets from their youth, they learn the truth about a painful sexual secret.

Mark Snyder’s script particularly hits home with its timely and authentic observations on life in post-recession America as the characters grapple with their lack of professional satisfaction and achievement. Nan exclaims bitterly, “You should hear my parents, like jobs are everywhere and we’re just being lazy.” Later Charlotte tearfully wonders how it was that she was so special in high school but isn’t special anymore now that success has eluded her. The balance of drama and comedy makes the tenser moments feel more nuanced and convincing.

The entire cast gives convincing performances that show talent for both comedy and dramatic moments. Melisa Breiner-Sanders, in particular, completely takes on the persona of the cloyingly smug overachiever, still stuck in her high school mindset. Ryan Barry and Julie Leedes also capture well the awkwardness of communicating sexual needs. As Wide As I Can See covers multiple topics and tensions, packing a lot into one work. While it explores multiple arenas, it nonetheless does so with both authenticity and skill.