Written and directed by Neil LaBute and Marco Calvani 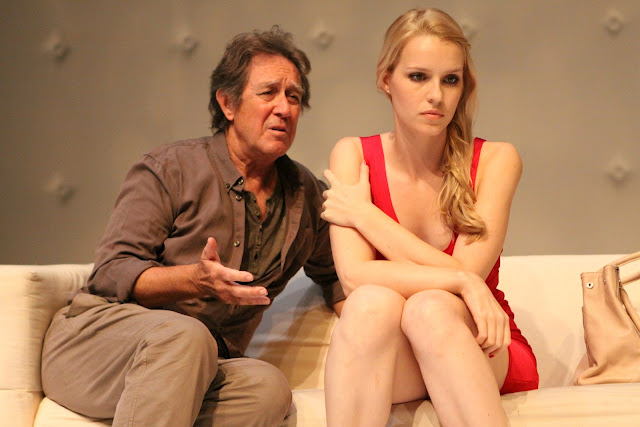 BOTTOM LINE: AdA is a stimulating, entertaining night of theatre. How gratifying to hear these new works from the great Neil LaBute and Marco Calvani.

The evening kicks off with Things of this World, written by Calvani. Lights up on Man (Larry Pine) and Woman (Estelle Parsons) sitting silently in chairs. Then, the sound of failing electricity and a blackout. The lights return and Woman rants...and rants...and she keeps ranting. She’s got a startling amount of information to share, mostly about others doing wrong, the glory days of her past and her upcoming social gathering. Her husband, meanwhile, has no response, and the butler listed in the program as Young Man (Craig Bierko) says things that only further annoy Woman.

At first, Things feels more like a rehearsal experiment than a performance: every move is so mannered, precise and planned that it’s hard to relate to anyone. There are abundant pauses and unnecessary layers -- like Woman’s lengthy explanation of a dream -- that muddle up the story instead of clarifying it. But this challenging, inimitable play gets better and better. Plot points that are at first confusing become intriguing and fascinating. There aren't answers to every question but that’s okay: Calvani dares us to formulate them ourselves. During intermission, I heard so many guesses, speculations, even arguments about the story and characters.

Larry Pine isn't given much to do, and -- although they were brilliant in Scary Movie 4 -- Craig Bierko’s facial expressions read as unspecific here. But Estelle Parsons is a standout. Her Woman is a materialistic, loud, deranged, neurotic, sad, desperate drunk. It’s a lot to portray but Parsons nails it in an intense, complex performance.

Any fan of his work will recognize the night’s second piece as a Neil LaBute play right off the bat. Minimal characters, all of whom are sarcastic and self-aware. A modern setting. Dark, dark comedy. In Lovely Head, we meet Gary (Larry Pine), a nervous and blundering middle-aged man who hilariously spills water all over himself in the play’s opening moments. He is soon joined by Amber (Gia Crovatin), a beautiful prostitute. And then Man and Prostitute have sex, end of play. Yeah, right. This is LaBute, so for thirty minutes these two engage in a battle of wits about life, money, family and love.

It is such a joy to witness Larry Pines’s astounding grasp on LaBute’s archetypal “Man” character arcs and language. His Gary is evocatively timid and his attempts at “jokes” plus lack of knowledge regarding the world today (he believes something called a meth-house actually exists) are perfectly awkward.

Crovatin’s performance is not as colorful. Her lines are delivered as generally bitchy/generically bratty, so as an audience member there’s simply no in. Her Amber may be wounded or may have suffered, but she comes off as too rude and unlikable to care. Perhaps director Calvani could have steered Crovatin in another direction, but at the same time Amber is written as exceedingly guarded.

Crovatin is also forced to tell us her character’s personality instead of showing us. “That’s my specialty -- cute!” she randomly recites... although followed by the very funny line “Oh, and golden showers,” it’s hard to mind this script flaw.

Some moments are hit or miss (not one but three outrageous stage falls, a signature LaBute twist ending), but featuring a lovely performance from Pines plus excellent pacing, Lovely Head hits home as a worthwhile contemporary character study. With a simple white set (skillfully designed by Neil Patel) and just two actors, I was engrossed from start to finish.

LaBute and Calvani have written about themes that really get them going and the actors are right on board. Author directing Author is a triumph.