By Daniella Shoshan; Directed by Alec Strum
Produced by Down Payment Productions 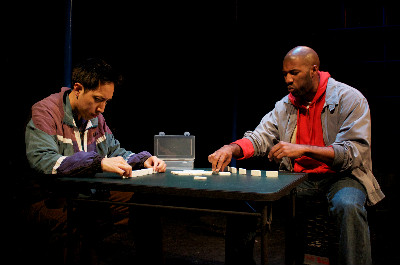 Dax Valdes (left) and Ronald Washington (right) in YES WE CAN. Photo by Ross Bell.

BOTTOM LINE: An entertaining analysis of stereotype and prejudice through a New York city lens with some enthralling acting and a witty script (although it presents a few too many themes and characters).

Individuality and stereotype (this could be the title of a Jane Austen novel) are two conflicting forces which are strongly present in modern society, and which can often lead to inevitable and unpleasant contradictions. In a society that has little patience for nuance, we are all too easily slapped on with a label --  “conservative,” “liberal,” “hipster,” -- which nicely fits us into a homogenous collective. While no one likes being labeled (since it essentially renders our individuality onto a secondary plane) aren’t we all guilty of having done the same to others? It is precisely these and other such themes that are subject to studious and comical analyses in Yes We Can, played against the backdrop of our very own cosmopolitan-metropolis (cosmopolis?), New York.

Yes We Can is the latest creation from Down Payment Productions, written by Daniella Shoshan and directed by Alec Strum. It is set within the context of the 4 days prior to Obama’s 2008 election success, at the height of the ever-increasing expectations tagged onto him and the media’s hyperboles of how this event would likely welcome in a new, post-racial society. The play involves a series of interrelated vignettes which tell the story of a diverse range of characters on the streets of New York: Latino nannies sitting in a park, a Chinese shop owner struggling with his taxes, a rabbi who encounters Jesus (literally), and a foul-mouthed lesbian with some domestic violence issues. The main story focuses on a scene of apparent discrimination on a bus, when a Caribbean nanny is verbally abused by the rich kid she is looking after, which leads to her losing her temper and dragging him off the bus. Larry (Ronald Washington), an outspoken African-American, takes the opportunity to sit next to Lejean (Makeda Declet) and declare his indignation at the discrimination they have just witnessed. Larry refers to both himself and Lejean as black, however Lejean (a rather attractive well-to-do young lady who is shocked and appalled at Larry's crude manners and demeanor) doesn't identify herself in that way. From that moment on, Lejean is submerged in a personal identity crisis where she seeks the help of a friend, a rabbi, and even some kids on the street to try and help her discern if she is really black, and how that relates to her personal prejudices. Failing to find answers, only a personal encounter with Larry will help her address this question.

Yes We Can's script is intelligent, and filled with witty conversation. It is brought to justice by a truly wonderful cast of actors who manage to perform many different roles believably. Gina Marie Jamieson plays a broke student who is helplessly trying to nanny a devilish child in what are some hilarious exchanges; Meera Rohit Kumbhani plays an immigrant Indian mother in despair at her son’s developing sense of entitlement, and Dax Valdes does a great job playing a Chinese man struggling to be treated as just another American. The play successfully balances the inclusion of funny and over-the-top characters while still being sufficiently deep and relevant for an intellectual audience.

However, in spite of the undeniable talent of the writer and authors, Yes We Can occassionally comes across as a bit of a confusing muddle -- there are simply too many things going on at once. While the main discernable plot is the story of Larry and Lejean, the multitude of other vignettes each bring up new issues and characters that seem slightly overwhelming to the play. The ending reinforces the idea of how both victim and perpetrator are equally guilty of prejudice, but it is a little anti-climatic since it leaves the personal crises into which both Larry and Lejean find themselves somewhat unresolved.

Overall, this play has great things going for it: some incredibly talented actors, good direction and a pleasureable script. It is enjoyable to see how the actors incarnate to perfection such a diverse set of characters, mirroring so well the communities you would expect to find on the streets of New York. However, I'd prefer to see the story settle on fewer themes, focusing more intently on some of the main characters and their plights; this could make the play even more engaging and intriguing. The performers and creative team are definitely worth keeping an eye on -- there is tremendous talent involved in Yes We Can.

(Yes We Can, presented by Down Payment Productions runs through July 2, 2011 at the Walkerspace Theatre, 46 Walker Street. Performances are Tuesdays through Saturdays at 8PM with an additional performance on Saturday, July 2 at 3PM. Tickets are $18 and are available at brownpapertickets.com or by calling 800.838.3006.