Tickets are available at planetconnections.org 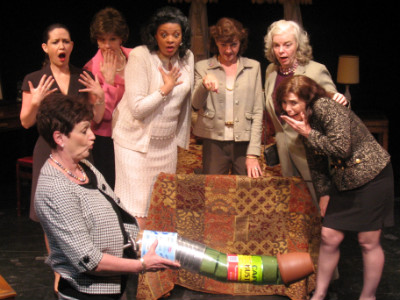 BOTTOM LINE: A wonderful premise and an energetic bunch of performers: this production has room to grow, but much potential.

According to White House Wives: Operation Lysistrata, former First Lady Laura Bush is quite the feminist! With a big heart and a pacifist sensibility, Laura (Pamela Bierly Jusino) seems to be the antithesis to her husband. It's 2002, just before the US invades Iraq, and Laura takes action against this admittedly unnecessary war: she invites the wives of the Bush administration big-wigs to the Lincoln bedroom, under the guise of a redecorating meeting, to propose a plan to stop the impending war. There, Lynne Cheney (Mary Tierney), Alma Powell (Yvonne Farrow), Joyce Rumsfeld (Leslie Lynn Meeker), Stephanie Tenet (Kate Konigisor), Cherie Blair (Terria Joseph), and Condoleezza Rice's fictional lesbian lover called "Significant Other" (Natasha Yannacañedo), take sides for or against Laura's drastic plan. The proposal: to withhold sex from their husbands until they vote against Operation Iraqi Freedom.

This clever premise offers ample fodder for the play to comment on 21st century politics through the eyes of the secondary players, who all seem tuned in to their mates' ideals and ambitions (and who are, therefore, qualified to comment on such). And by assuming the theme of the Greek comedy Lysistrata, by Aristophanes, the play contains opportunity to reflect on the comedic roots that entertainment still heavily rests on today. Unfortunately, White House Wives doesn't completely harness the comedic power of Lysistrata, choosing instead to focus on the governmental issues at hand. And the result is something far more pedantic than satirical.

Sometimes White House Wives is realistic (as Laura laments her husband's Middle Eastern revenge fantasties); sometimes its fantastical (as the ghost of John Wilkes Booth razor-scooters into the Lincoln bedroom with pistol in hand); sometimes it's self-referential (as the Stage Manager, played by Clark Jackson, enters and everyone comments about the playwright's choice to bring him on stage); and sometimes it drops its fictional narrative entirely (as Laura brings a book of Aritophanes' plays center stage and reads from Lysistrata in direct address, asking the audience to join in). For my money, I'd like to see two to three of these devices dropped all together, and I hope that in future productions a more specific structure can be found. The source material is strong enough to carry the narrative without needing to make excuses.

White House Wives is endearing, both thematically and through the energetic performances by its hammy cast. Jusino is the perfect Laura Bush, putting an endearing awareness behind that confident politician's-wife-grin we've seen so many times. Yvonne Farrow is also particularly spot-on as Colin Powell's wife -- as the only African American amongst a very WASPy bunch, she has several appropriate lines drawing attention to this fact. Playwright Yvette Heyliger, herself African American and female (a combination not seen enough in American theatre, particularly when commenting on the nation's politial landscape) takes advantage of her position and writes dialogue that brings her unique perspective to light. It's refreshing to see the women behind the Bush administration have an opportunity to speak for themselves.

(White House Wives: Operation Lysistrata plays at the Robert Moss Theater, 440 Lafayette Street, 3rd Floor, through June 18, 2011. Remaining performances are: Thursday, June 16 at 6PM and Saturday, June 18 at 6:10PM. Tickets are $18 and are available at planetconnections.org.)