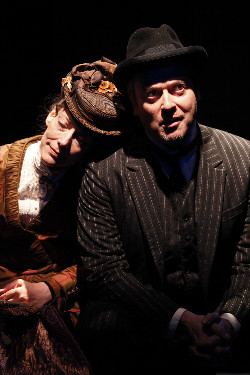 BOTTOM LINE: A story of love and deception delivered beautifully by a strong cast and crew.

Adelaide, the protagonist of Karoline Leach’s play Tryst, is not exactly a blushing flower. Within the first few minutes of the show, while describing her coworkers at her sewing job at a hat shop, she says, “We’ve all got something wrong with us -- that’s why they’ve got us in the back room.” Tryst, like many stories, is about one of those “back room” people who wishes for a better life -- a husband, a good job, the luxury of traveling to Venice -- but accepts that it’s never going to happen. But one day, as she fatefully draws the hat shop’s window curtain aside during her boss’s lunch break, she encounters a man name George, whose attention forces her to think that her desires may just come true.

A tryst, by definition, is a secret meeting between lovers and in the case of George and Adelaide this comes in the form of a wedding and a trip to the seaside as a honeymoon; Adelaide promises George she will not tell her parents. However, it becomes clear (quickly to the audience, slowly to Adelaide) that George’s intentions may not be so sweet.

What unfolds at the seaside boarding house is almost like a dance. George walks a delicate line as he tries to deceive Adelaide while simultaneously gaining her trust, a task that is made infinitely complicated by her past experience of abuse and her inescapable self-doubt. Meanwhile, Adelaide oscillates between a desperate need to be romantically loved, a panicked desire to go back to the life she’s always known, and a newfound sense of self-assurance, all while having to deal with an increasing suspicion of George’s motives. This all comes out in a series of scenes comprised almost entirely of dialogue. With such weighty and complex subject matter, Tryst could easily collapse into an overly-emotional mess, but this production stands solidly on the four legs of writing, direction, design and performance.

Andrea Maulella’s performance as Adelaide is the most essential element in the success of this production. Maulella brings Adelaide’s immensely complicated interior world to the surface -- constantly smoothing the waist of her dress when she’s anxious, smacking her forehead (in a manner that isn’t at all cartoonish) when she thinks she’s said something stupid, and battling with herself to look George in the eye. Maulella’s performance is so visceral that I found myself squirming in my seat, unsure if I wanted to turn away or hop onto stage to take her into my arms and stroke her hair, a sensation which reached a screaming pitch in the final scene. She is one of the most tragic and haunting characters I’ve ever seen on stage.

Mark Shanahan is also convincing as George Love, who is driven by heartless manipulations, with pitfalls into sympathy for Adelaide that come at just the right moments to keep the plot moving forward (and to keep the audience from hating him). At once boyish and predatory, Shanahan’s George is also a complex and conflicted character.

Though Leach’s writing is beautiful, it is easy to imagine it falling flat when, say, George is convincing Adelaide that she should now see a new person, “Mrs. Love,” when she looks in the mirror. However, as the dialogue flows naturally from the mouths of Maulella and Shanahan, the story comes across as tragically believable and a complicated world comes to life on the Irish Rep’s small stage.

The mood of the show is almost palpably instilled into Michael Schweikardt’s two-part set that utilizes conflicting color schemes to portray the city and the seaside (with a surprising and effective method of changing between the two). London is embodied by greyscale panels depicting a network of narrow streets. The bedroom of the boarding house is all in warm tones and outfitted with Sven Henry Nelson’s meticulously-chosen props that, even without a glimpse of the sand or water, place the room unmistakably by the sea. The modest-looking room is an artificial version of a domestic life -- the perfect setting for George and Adelaide’s drama to unfold.

Though Tryst is one of those rare instances in theatre when every person in the playbill seems to have nailed their part, and done so in harmony with the group as a whole, it may not be for everyone. The subject matter is dark and often uncomfortable and the dialogue may exhaust the stamina of some theatregoers. For those attracted to haunting and complex stories: go see this show, and you may want to allow some extra time for discussion over post-show drinks.

(Tryst plays at the Irish Repertory Theatre, 132 West 22nd Street, through August 21, 2011. Performances are Tuesdays through Saturdays at 8PM and Wednesdays, Saturdays and Sundays at 3PM. Tickets are $55-$65 and can be purchased by visiting irishrep.org or by calling 212.727.2737. For more show information, visit irishrep.org.)