Off Off Broadway, New Musical
Runs through 10.12.11
McGinn/Cazale Theatre, 2162 Broadway 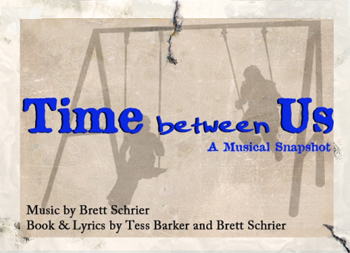 BOTTOM LINE: A sweet and sincere two-person musical about friendship.

Full orchestras are great, but there is something intimately haunting about a piano and a cello together, alone. Add two incredible vocalists to the mix, and the musical result becomes something beautiful but raw, refined but real. Time Between Us is almost entirely sung, its lyrics providing the narrative and explaining the characters' struggles. The combination of orchestrations and vocals together offer a downright lovely experience.

This is partly due to a first-rate cast: Kristy Cates plays Morgan and Kasey Marino plays Matthew. Both performers have voices that can bounce between standard Broadway flair and a grittier contemporary sound. They are reliable singers who sound fantastic together. And since the show involves a tiny cast (just three total, including the metaphorical "Man" played by Tom Rainey), they also have to act. Luckily, both Cates and Marino are adept performers who offer touching portrayals of friends growing up and growing apart.

Also worth noting is composer Brett Schrier's score, which is sophisticated without being overbering. Time Between Us employs a modern musical effect that evokes Jason Robert Brown and even Jonathan Larson; it feels very contemporary but it’s still true to the genre. Schrier is a working music director and vocal coach with obvious talent –- he understands the composition as a whole. And with Schrier on the keys and Ben Larsen on the cello, it all sounds really wonderful.

Time Between Us is about Morgan and Matthew, college friends who leave art school with an optimism that has nowhere to go but down. The musical captures the next decades that follow, as they pursue their separate careers and lives, while their friendship inevitably disintegrates. Life is hard, time passes quickly, and the choices you make are often inescapable, the play tells us.  For Morgan and Matthew, very different paths and a disdain for / jealousy of the other one’s decisions leave a friendship in the lurch.

It is refreshing to see a work explore friendship, rather than romantic love, as seems to be the thread that runs through all musical theatre. This show is about a relationship, and it’s certainly about love, but it’s beyond the idea of coupling and in a way it’s even more touching without sex getting in the way. Losing a friend can be traumatic, and Time Between Us shows how we cope.

Shows in the New York Musical Theatre Festival are generally still in development and the festival’s packed schedule means limitations for the scale of participating productions. Time Between Us doesn't feel like a full production just yet, but you can see its potential. With a few props, minimal lights and not much movement, the story and music come further into focus. Playwright and lyricist Tess Barker, along with co-author and composer Schrier, have created a moving narrative we can all relate to. I’m anxious to see where this show goes next.

(Time Between Us plays at the New York Musical Theatre Festival, at the McGinn/Cazale Theatre, 2162 Broadway, through October 12, 2011. Remaining performances are October 5th at 8PM; October 8th at 8PM; October 10 at 8PM, and October 12 at 8PM. Tickets are $25. For tickets and more info visit nymf.org.)