The Taming of the Shrew 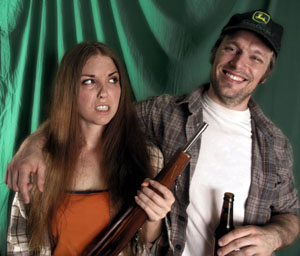 BOTTOM LINE: This production succeeds in putting a new spin on Shakespeare: a modern setting and inventive staging make this work compelling even for those frequently put off by the Bard.

DMTheatrics' American Shakespeare Factory and Horse Trade Theater’s new production of the Taming of the Shrew takes the classic Shakespearean work and moves it to the modern American South. (A specific state is never mentioned though the residents of this Padua have an undying love for Budweiser beer, KFC chicken, and NASCAR). From the production’s beginning, it is amazing just how different the Bard’s words sound when spoken with a thick Southern accent, it in fact takes a minute to register that this adaptation mostly sticks to the original, as much of the dialogue’s inaccessibility and eloquence is changed through this twangy vocal dymanic. (It also works particularly well for evoking the cluelessness and verbal maladroit of certain characters, as Shakespeare’s English can falsely give each character an air of articulation.)

The production eschews the usual seating arrangement of the Red Room Theater, moving some chairs on to the sides of the stage and then placing pillows on the steps where the chairs usually sit, to become a thrust stage. As the audience faces the stage from three different angles, the actors play to all sides, sometimes even sitting on the front steps amongst the audience. This set-up allows for a more engaged feeling between the audience and the cast, though it does inevitably leave some members of the audience facing the backs of the actors at certain points.

You can expect the same plot you know from the Shakespearean text you read in high school English class, or from the Julia Stiles movie, Ten Things I Hate About You: the sweet and mild mannered Bianca (Lindsay Carter) has multiple suitors interested in courting her. However, her strict father Baptista (Charles Baker) will only allow her to marry once her older and more tempestuous sister Katharina (Brianna Tyson) is married. This is bad news for Grumio (Josh Potter), used car salesman Hortensio (Joshua Schwartz) and Lucientio (Zachary Luke), who are all plotting their way into Bianca’s heart. Luckily for them, Petruchio (Adam Swiderski) comes into town with his southern brashness, intent on marrying Katharina sight unseen as he hopes to land her father’s fortune. Although, of course, wooing Katharina and taking her as a wife requires Petruchio to “tame” her.

Brianna Tyson and Adam Swiderski are near perfect as Katharina and Petruchio, showing a gift for comedy both in their laugh-evoking delivery and physical movement. As a whole, the cast shines in their roles, using verbal emphasis and overt physical gestures to communicate the clever quips in the script that can sometimes be lost on unfamiliar ears, a strategy that can be credited to the skill of director Frank Cwiklik (who also enthusiastically helps seat the audience and keeps them abreast of the intermission.) Joshua Schwartz and Zachary Luke also show a gift for physical comedy in their performances as Hortensio and Lucentio.

While this script is mostly true to the original text, a few minor additions and subtractions add to the humor and somewhat modern feel of the overall production. For example, when Hortensio reveals his true identity, his announcement is met with “duhs." Overall, the production succeeds in creating an energetic and funny take on an old classic, creating a work that will appeal even to those who are usually disinterested in Shakespeare.