By Teresa Deevy; Directed by Jonathan Bank
Produced by The Mint Theater 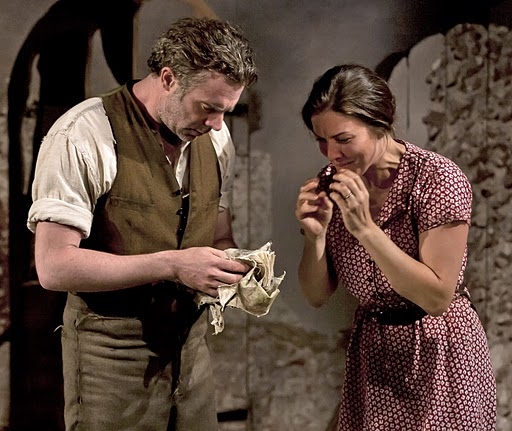 BOTTOM LINE: A conflict between man, wife, poverty and the need to do what is right sits at the heart of Temporal Powers, Teresa Deevy’s 1927 play newly unearthed at the Mint Theater. Set in a ruin in the poor Irish countryside, an evicted pair of squatters find a life-saving sum of money with dubious moral origins, and argue about which is right: to obey the law or to starve.

We come upon the Donovans, hardworking Mick (Aidan Redmond) and sour-faced Min (Rosie Benton) on their first evening in a dilapidated old ruin (designed by Vicki R. Davis, it is an interior but, oddly, painted to convey its own exterior). Min berates her husband for never being able to give her more, and how she has gone without fine things in her choice to marry him. Mick retorts that he could only do the work laid before him, at the moment, fixing their new home. In the course of this repair, he discovers a huge pile of cash — and is immediately certain they have come upon a criminal’s stash. As he declares he will take it to the authorities, Min argues that the only crime here is to remain destitute when the tools of salvation sit in your own lap. As the story unfolds, a cast of well meaning neighbors and at least one thief add their ideas and work their part in the events, which we feel from the very beginning can only end in disappointment.

A tragedy of finances and morals in the vein of Steinbeck’s “The Pearl,” the capable cast embodies their writ-large characters with a striking subtlety, from Moses Barron (Eli James) the affable neighbor, to Daisy Barron (Fiana Toibin) his blustering mother to Ned Cooney (Con Horgan) the disquieting criminal whose stash has set the plot in motion.  Min’s almost yuppie-ish need for his husband to prove his worth (“What good is any man if he don’t outdo who’s living beside of him?”) butts heads sharply with her husband’s search for simple contentment in a day’s work and a night’s rest. The most engaging part of the play is acting as jury, and thinking about where you stand, and why.

All of the actors competently tackle the Irish dialect and the particular syntax that accompanies it. Benton’s seems slightly uncomfortable in her mouth, but she has not allowed it to distract her from the play, and her performance is solid and brooding, particularly in her scenes with Redmond. Her gloomy dissatisfaction and feelings of impotence in being the wife of a contented man visibly feed one another, and Redmond is a fitting and levelheaded anchor for the action. The scene-stealing Wrenn Schmidt as Lizzie Brennan, the enthusiastic girlfriend of the reluctant Moses, deserves accolades as the ray of sunshine in this otherwise dismal world. She is winning and adorable from the moment she walks onstage, and an incredibly fitting foil to Min. While the latter broods at what her man cannot, will not get for her, bubbly Lizzie will take matters into her own hands to get herself what she wants — to be married to Moses — even if it means getting a little dirty and thinking outside the box. Lizzie, as written, is a breath of fresh air, and Schmidt breathes the life into her. Moses is caught between her and his gossipy, guilting hen of a mother (the mirthful Toibin), and while this is perhaps not a desirable place to be, they are all three delightful to watch.

As we watch the futile action onstage, the key to Temporal Powers is to join it, and decide for yourself what’s right and what’s best. My decision is that this works best as a debate, and those willing to be an active participant in the dialogue will have the best time.

(Temporal Powers plays at The Mint Theatre, 311 West 43rd Street, 3rd Floor, through October 9, 2011. Performances are Tuesdays, Wednesdays and Thursdays at 7PM; Fridays at 8PM; Saturdays at 2PM and 8PM; and Sundays at 2PM. Tickets are $55. For tickets and more information, visit minttheater.org.)