The Sugar House at the Edge of the Wilderness 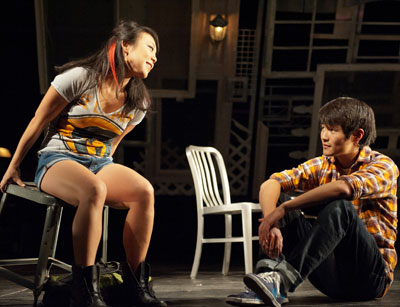 A scene from THE SUGAR HOUSE AT THE EDGE OF THE WILDERNESS.

BOTTOM LINE: A beautiful show; even with a few problems, it's totally worth it.

Carla Ching's new play, The Sugar House at the Edge of the Wilderness, has a long, cumbersome title. But the show is lovely and enigmatic. The performances are exquisite, the design wonderful. The direction and writing are where this show suffers, but only slightly.

What the press notes say: It's a play with music and a live Twitter feed about kids growing up fast, children raising children, and shifting notions of home. When their father dies suddenly and their mother goes on a grief pilgrimage, Chinese adoptees Greta and Han are sent to live with their ex-rockstar uncle and his young girlfriend. Wrestling with the wilds of New York and their grief, Greta gets in trouble with the law and put in a court mandated reform program and Han runs away to play music on the street. On the edge of the wilderness, Greta and Han must ask themselves: If I can't go home, where do I go?

What I say: An incredibly moving, somewhat clumsy jigsaw puzzle of different times, tweets and texts, and astonishing performances. A bit overwritten at times and somewhat oddly directed, it is nonetheless a quiet and breathtaking story of breaking walls and letting go. I'm not often a fan of the 'nobody loves me' drama, an elephantine and rather obnoxious generalization for what is/are usually stories of family and/or love, because its very rare that there is anything fresh or magical about them. They are typically regurgitated pieces of leftover dressed salad. Not this play.

Greta and Han, played by Ali Ahn and Christopher Larkin respectively, give performances that could grow flowers. The other actors in the play are all wonderfully cast and I also give special notice to Cindy Cheung for her outstanding performance as Baby Yaga, the Nurse Ratchett-like character who controls the reform school Greta is sent to live in. Equal parts menacing and vulnerable, formidable and demure, delusional yet somehow rational, she is the villain of the play, or is she? She's certainly the physical villian, given a face and a voice by the playwright, but I think that the real evil in this play is Greta herself. Baba Yaga is a catalyst for Greta's internal struggle.

Greta, our hero and anti-hero, is a young girl of extraordinary power and emotion, she hurls insults and chairs at people, furious, and at the same time closes herself off from the world. The only one she lets in, and then is in danger of losing, is her brother Han, and the real battle of the show is her fight to keep him at her side; she needs to open up enough to let that happen.

The design of the show is beautiful. Video, set, lights, costumes, sound, all working seamlessly. It's lovely to see a production with money spent in all the right ways, so well done, design staff.

The sticky bits: Daniella Topol's direction felt a bit wonky to me. Transitions were a bit weird and off-putting, and not really thematically consistent -- the play jumps around in the timeline, and sometimes I was completely confused as to when the characters onstage were existing; this does an already disjointed show no favors. I also felt, at least for the first half of the show, a strange disconnect with the characters. Nothing was really connecting with me, and the characters didn't seem to be connecting with each other. I'm not sure whether this was intentional, if so, brava. That's a very hard thing to pull off, for the audience to come to grips with the story as Greta comes to grips with herself.

I'll say one brief thing about the script. It has some beautiful writing. It has a lot of beautiful writing. But there are moments, towards the end especially, when the actors are doing such magnificent work, and there are so many words! I didn't need so many words, the scenes were bleeding with words. I saw incredible actors onstage, doing the work of a Shakespearean monologue with mere silence. I want more silence, to fill in the blanks myself.

(Also, briefly, the fairytale of Hansel/Gretl, getting trapped in a witch's house made of candy is a somewhat oblique metaphor, but when you squint and tilt your head, it's there, and it adds yet another dimension to the magic).

In a New York City world full of average plays about families and love, The Sugar House at the Edge of the Wilderness stands alone at the top of the hill. It is beautiful, twisted, dark, and magical, and singular in a world full of typical, cookie cutter plays that all look the same. Well worth the trek up the hill, I'd say.

(The Sugar House at the Edge of the Wilderness plays through December 4, 2011 at The Connelly Theatre, 200 East 4th Street. Performances are Tuesdays through Fridays at 7:30PM; Saturdays at 2PM and 7:30PM; and Sundays at 3PM. There are no performances on November 23rd or 24th. Tickets are $25 and can be purchased by calling TheatreMania at 212.352.3101 or by visiting ma-yitheatre.org.)