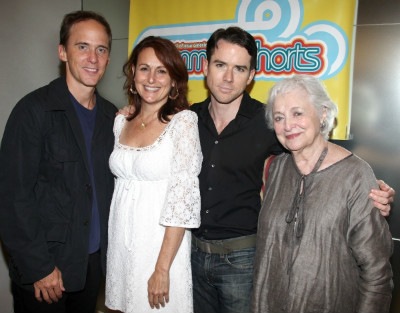 BOTTOM LINE: An interesting mix of stories, voices, and tones makes this series of short plays worth seeing.

59E59 Theatres offers the second half of their Summer Shorts Festival with their series B plays. For my money, they don’t pack as powerful of a punch as the Series A offerings (playwright greats Neil LaBute and Alexander Dinelaris are tough to beat) but are worth a gander nonetheless. The second half of the festival features some evocative scripts and strong performances.

Lessons For an Unaccustomed Bride

In Lessons for an Unaccustomed Bride, young bride to be Mayra (Shirley A. Rumierk) comes to seek the help of the village’s witch, Yessenia (Socorro Santiago) to quell her uncertainties (the exact place and exact time of the story are never specifically identified). She carries a pan of her mother’s best pastellas as payment for the assistance. However, as a devoted Catholic, Mayra has qualms about seeking the woman’s help, openly admitting that she is afraid. Yessenia soon enough delivers the sobering news that her fiancé is cheating on her, and that like most other men, Mayra’s insistence on preserving her virginity has led him to seek out carnal fulfillment elsewhere. When Mayra insists that she believed he was “uncommon,” Yessenia tells her that that was her first mistake. Yessenia tells Mayra she can put a spell on her husband-to-be to make him forever faithful to her, but this soon angers Mayra as she feels at conflict with her religion. The two hash it out until Yessenia reveals the reason she turned her back on Christianity. Socorro Santiago gives an energetic and believable performance as Yessenia.

Some Women in Their Thirties Start to Fall

Some Women in Their Thirties Start to Fall finds wacky humor in taking the expression “she’s lost her head” to a literal extreme. The play centers on Charlotte (Crystal Finn) a thirty-something woman who one day finds herself keeling over in front of an Upper West Side Citronella and literally losing her head. She fruitlessly attempts to guide her clumsy body back to her until helpful passersby (who also are busy snapping cell phone photos) call a doctor (Ryan Shams)to come and help. The doctor soon discerns that she might have lost her head due to the fact that she is head-over-heels for a married man. However, it soon seems that Charlotte might find a better love match in the doctor himself. Some Women in Their Thirties Start to Fall is sweetly funny in its wacky humor and tale of love gone awry. All of the gifted performers carry off an over the top premise, milking every laugh possible from the script. Actress Kate Geller, who plays Charlotte’s body, also proves to be quite kinesthetically gifted in her movement as a headless body.

Clap Your Hands opens with two couples dining together at the Waldorf Astoria on the eve of 1948, Anson (J.J. Kandel) is an employee of Joel's (Victor Slezak) and he hopes to get on his good side in order to garner a promotion. They speak to each other in a cloyingly false manner, discussing such innocuous things as the difference between New York City and New Haven, Connecticut on New Year’s Eve. The facades of niceties, however, are soon destroyed when Anson makes too many flirtatious remarks to his boss’s wife Paula (Meg Gibson) and then dances with her. His own wife Stella (Meg Ketch) drinks too much champagne and begins to leak her insecurities towards her husband’s fidelity. She asks Joel what he would do if his wife was unfaithful, telling him without a hint of humor that if she found out he was cheating on her she would “shoot him.” Things get worse when Anson returns and Stella announces to the boss that he only agreed to the dinner “because he’s trying to kiss your ass.” Clap Your Hands presents a humorous look at the perils of marriage and the script’s humor is well communicated by an excellent cast.

Written and Directed by Will Scheffer

Scheffer, co-creator of HBO’s series Big Love, returns to the stage with the standout of Series B’s shorts, The Green Book. The play centers on a gay married couple, named Sam (Christian Campbell) and Ben (Neal Huff), who go to visit Ben’s mother, Shella (Rebecca Schull), who suffers from both dementia and aphasia. These ailments mean that while the two sense that the mother might understand what they say they have no way of knowing for sure. Sam shines in a scene early in the play in which he tries to communicate with Shella (though the moment is somewhat drowned out by loud, sentimental music that gives the sensation of a soap opera).

The play picks up its pace when sister Franny (Jodie Markell) returns to the home, toting the many groceries she has bought for her ailing mother. It becomes clear that Franny is bitter over having to care for Shella and claims that though she can’t speak she can see her resentment towards her in her eyes. Franny makes several dark jokes about their family’s Jewish history, hinting that they suffered in the Holocaust. She refers to Sam as a Nazi (“I’m Scottish!” he retorts), and then later mentions that their Aunt Linda thinks she’s “hot shit just because she survived Aushwitz.” Franny soon drops the humor and gets to the heart of the matter, pulling from her bag a green book she stole from Shella. At its very sight Shella begins reaching and grunting, incapable of stopping the flood of truths from being revealed. Franny pulls open the book and dark secrets are revealed. The Green Book is powerful in its moving story and black humor, which together create an evocative piece. While the beginning of the work is slow to start, the second half speaks about the power and tension of family history and obligation. Actors Christian Campbell and Jodie Markell, in particular, give standout performances, able to quickly move from humor to drama.