Off Off Broadway, Play
Runs through 7.23.11
The Flea Theater, 41 White Street 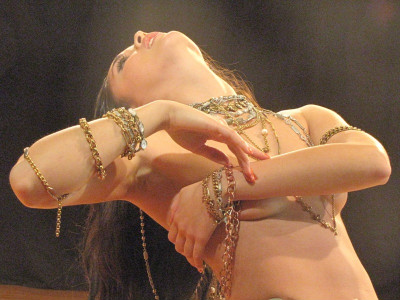 BOTTOM LINE: A feast for the eyes; intense, poignant and disturbing.

Salome (Karina Fernicola-Ikezoe) prizes her chastity and, much to the chagrin of her mother, Herodias (Tatyana Kot), scorns all men who would dare defile her, most of all her uncle and stepfather, Herod Antipas (Alessio Bordoni). Her disdain fades when she encounters the prophet Iokanaan (Chris Ryan) who refuses her. Familiar with her budding sensuality and ability to tease to get what she wants, Salome is infuriated by Iokanaan’s derision; the first and only time she decides not to withhold, she is rebuffed. Agreeing to give Herod what he wants if she can have Iokanaan’s head, she dances the Seven Veils for her uncle, herself defiling the chaste beauty she once flaunted so proudly. Salome falls from grace to get what she wants, only to end up facing dire consequences.

Director Rene Migliaccio has used the play’s leitmotif of the moon and the dance—synonymous with the title character—to construct a stunning world for his audience. Beautiful projections (by India Evans) flow and change from one feminine lunar landscape to another, by turns more disturbing as the plot thickens. We enter through the stage, past palace guards in natty suits held in rapt attention by the glowing moon above them. In a style reminiscent of Noh theater, each character wears a different silver-white face of makeup and uses body language more suitable to a dance piece. Each move is slow, languid and carefully prescribed, each footstep deftly placed, each word spoken in time with the actor’s blocking. This last trait frequently works against the play, as moments seem to drag in pace with the actors’ drawl. Bordoni escapes some of this in Herod’s drunken leering, and Kot’s still regalness allows Herodias to scold her husband meaningfully. However most of the performers behave far more as dancers than actors, and the words sometimes get stretched out to the point of meaninglessness; the text is a soundtrack to the ballet. Black Moon's Salome is a delight to see and almost irrelevantly heard, the latter a little disappointing when the words come from an artist like Oscar Wilde.

In the title role, Fernicola-Ikezoe is a superb dancer, and not just in the princess’s climactic performance (yes, I counted all seven veils). More than any other cast member, she fleshes out Migliaccio’s choreography, conveying life and emotion in her every move, down to her fingertips. Her solo dance is thrilling and erotic, not to mention impressively complex for what could have been an overly-simple striptease or belly dance. It is both of those things and neither, though clothes do come off. Instead, it is a brilliant exercise in the art of tease, and we collectively lean to the edge of our seats, waiting for the last veil to drop. It is a true culmination of her dramatic turn, and has to be seen to be understood. Salome's spoken scenes, however, come up a little short. This Salome is too much the petulant princess for my tastes, and a single dimension does not match the depth of her movement. Because of this, her many moments of stillness feel empty. On the opposite end of the spectrum is Ryan’s Iokanaan. The only member of the cast without a painted face, he spends all but one scene as a voice at the bottom of a cistern, and though here we see him behind a scrim, his booming baritone, both with and without artificial reverberation, alone fills the space. Unlike Salome, he moves very little, but his constant stillness is full and tense with divine inebriation, his clean countenance laid bare and expressive. Ryan's diction is crisp and his words always drive home their meanings—he would be a sorry prophet if they didn’t. Ryan is definitely the surprise highlight of this production, and it is no wonder the princess is drawn to him.

Salome is a feast for the eyes and will gain any dance lover’s appreciation. Those looking for an Oscar Wilde discourse will discover this production lacking. But fans of unconventional, highly visual theater will find it a worthy addition to the downtown theater scene. Black Moon Theatre Company may not have hit the bullseye with Salome, but they definitely hit on something beautiful.