Written by Gerard Vazquez, based on the movie by Federico Fellini
Directed by Rene Buch and Jorge Merced
Produced by La Strada Theater Company 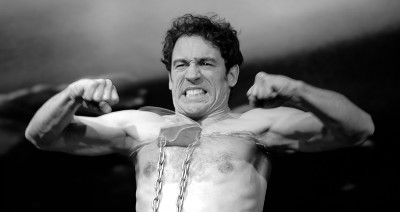 BOTTOM LINE: A slow-paced rendition of the classic movie with impressive acting and wonderful music convincingly bringing to life the fantastical feel of Fellini’s characters.

La Strada Company is a New York based Spanish artistic company whose mission is to imbibe the New York theatre scene with a healthy dose of Iberian influence. With that in mind, you won’t be surprised to hear that their production of La Strada is, in fact, in the Spanish language (with English supertitles) and stars actors from Spain, Argentina and the the Dominican Republic. Having spent some of my infancy in Spain I was reveling in the chance to finally see some Spanish theatre here in “La Gran Manzana.” The play is an adaptation of Federico Fellini’s classic 1954 Italian movie La Strada, which won an Academy Award for best foreign film. I find it both interesting and unusual that a theatre company that looks to promote Spanish influence would give itself an Italian name, a fact that can perhaps be explained as the intent of the company to break away from any constraining logic and set its own unique path, or strada, amongst the New York cultural offerings. After all, presenting a staged production of Fellini’s Italian classic in the Spanish language in New York is certainly a courageous and unconventional proposition.

The play starts off with an apparition of a clown who comically plays and hovers around a strong beam of light coming from the ceiling in a manner which much resembles a Mr. Bean sketch. The life of these itinerant street performers is a constant theme in La Strada, and the clown is soon accompanied by his two buddies as they narrate the story of Zampano and Gelsomina. Nanda Abella plays Gelsomina, a simple girl from an impoverished Argentinean family who is sold off to the showman Zampano (Luis Carlos de La Lombana) to be his assistant. They travel around performing his amateurish show, which consists of wrapping a chain around his chest and subsequently breaking it in a show of strength (this guy wouldn’t last a day in Central Park). Zampano is a brute, a man who has had any feelings beaten out of him by the tough life on the road and the almost vagabond existence he endures as he frequents town squares and local circuses in search for enough to earn his keep. In spite of the docility of Gelsomina, he immediately exerts his dominion over her by abusing her both physically and emotionally, and claiming her as his lover.

One of the highlights of the show is the power and depth that the music provides to the story. Through the use of only three instruments, a tambourine, a violin and a trumpet, and two different tunes, the music gives the tale a remarkable emotional depth and variety. The two tunes are repeated on many occasions, each time with changes in their timing, rhythm and volume which very much transform the mood and emotions they evoke.

As Zampano and Gelsomina settle at a circus they meet “el Loco” (Israel Ruiz), a clown and tightrope walker whose appearance will signal the beginning of the drama and ensuing tragedy. El Loco gets sheer enjoyment out of mocking Zampano for his brutish manner and stupid demeanor, although he will eventually pay dearly for it. While Zampano is held at the local police office for threatening Loco with a knife, the clown explains to Gelsomina that she can escape, that she can rid herself of the brute -- and yet he makes her see that Zampano must love her as that seems to be the only explanation of him actually keeping her by his side, in spite of her lack of beauty and obvious shortcomings as an assistant. He leaves her by explaining how everyone has a role, a purpose, a path to follow, and hers must be that of being loyal to Zampano. But don’t be fooled by this glimmer of hope, in true tragicomedic style, the tale ends with a generous serving of sadness, madness and death.

While the set of the show is extremely simple, it does allow all the attention to be focused on the acting. Lombana does a phenomenal role as Zampano, embodying with skill the brutish and primitive nature of the character while still providing enough glimpses of humanity to make you realize how tough it must be to live Zampano's life. The directors make good use of repetition, especially of the show that Zampano performs -- it is repeated at least 4 times during the play which really drives home the humiliating experience it must be to perform it every day without rest. Abella does such a good job portraying the fragility and naiveté of Gelsomina, that at times I just wanted to rush out of my seat and give the poor girl a consoling hug. Ruiz also displays his immense talent as el Loco with his hilarious gait, sagacious grin and witty dialogue. This is a truly talented cast which successfully brings to life a difficult set of characters.

While I greatly enjoyed the show (I’ve already put the movie in my Netflix queue) it did get off to a bit of a slow start, as the story really takes off in the second act. Half of the first act is made up entirely of three clowns who interact in, well, a sort of unflattering clown-like fashion: you know, silly gags, absurd conversation and overly exaggerated motions. And while I did let out a giggle here and there, it took a long time for them to finally introduce the story of the main characters, time which could have been dedicated to developing our heroes a little more. In addition, the translated superscripts were clumsily projected on to a small screen in the corner of the stage, and often lagged behind the live conversation making it hard to follow at times if you can’t speak Spanish. I was, however, at a preview performance so I imagine that the synchronization will improve with later performances.

La Strada really breeds off the talent of the cast and the extraordinary use of the music. The whole show exemplifies the depth that can be obtained through the careful use of simple elements: a minimal set, a few instruments and a couple of tunes. The result is quite enthralling which makes up for its inherently slow pace. It is, in fact, the second time the show is presented in New York this year after receiving several awards the first time around. So if what you’ve read sounds alluring, grab your Spanish dictionary, a glass of Rioja and head down to see La Strada at TGB.

(La Strada plays through December 4, 2011 at TBG Theater, 312 West 36th Street, 3rd floor. Performances are Tuesdays and Wednesdays at 7PM; Thursdays through Saturdays at 8PM and Sundays at 3PM. Tickets are $35 ($20 for students/seniors) and can be purchased by calling 212.868.4444 or online at smarttix.com.)