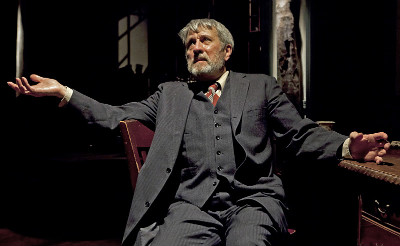 John Michalski as Rabbi Kroeller in A SPLINTERED SOUL. Photo by Richard Termine.

After escaping from war-ravaged Poland during the Holocaust and settling in San Francisco, Rabbi Kroeller heads a small support group of Polish refugees, meeting in his apartment over tea, and sometimes cookies, to recount their trials and tribulations in the New World. Each with his and her own memories and past actions keeping them from truly feeling whole or able to acclimate, they also deal with being looked upon as immigrant novelties, damaged but fascinating goods, the un-understandable other. Matters become further complicated when a young pair of Jewish Polish siblings arrive begging for help, claiming that their non-Jewish, Polish guardian has been peddling them around the world, forcing them to steal and commit crimes, while also abusing them. The Rabbi brings the children into his support group and eventually holds a mock trial, attempting to determine the correct course of action to aid the poorly pair. After taking matters into his own hands, however, the Rabbi discovers some unsettling news about those he’s taken under his wing, but only after it’s too late.

Peppered throughout the play are highly theatrical, non-narrative moments in which the Rabbi speaks to God, his deceased wife and acts as a confessional for the other immigrants. These pinpointed, spotlit moments reveal the Rabbi’s psyche and serve to show the gradual evolution of the holy man’s thought processes and faltering belief system. Despite having already lived through the most difficult of times, now faced with a post-War survivor’s life, the Rabbi’s faithful but progressive mode of thinking cannot help but slip towards an eventual lack of belief altogether. Though occasionally a bit didactic, the material within these narrative intervals is some of the most provocative stuff as well as the most universal. Not simply showing a faithful man fighting through adversity to maintain his beliefs, the Rabbi defends the actions taken to ensure survival, delivering a pro-life monologue to calm a support group member, and does not condemn another member his homosexual actions during the war. It is the thoroughly multifaceted man Brooks presents in the Rabbi that is the stirring linchpin of the piece.

Not simply presenting the duality of holy and unholy man, however, Brooks also interestingly presents the juxtaposition of the American versus Eastern European Jewish experience. When placed next to the tidy and chatty American Jews, the deeply scarred and heavily accented immigrants look all the more foreign and fascinating, though are also, thanks to Brooks’s somewhat heavy-handed sympathies, much more likable and so much more human. While not all the moments throughout Brooks’s script feel wholly natural and easy, the complicated characters he presents buoy the play along with the questions they bring up. In the end, though, it is the gossipy and prying Americans who are not so blinded by their own conflicted pasts that are allowed to understand who is acting out of good and who is not. That is, when they are not nitpicking about what happens between others behind closed doors.

And Kevin Judge has created just the right closed doors, and what’s behind them, in his beautifully usable set, which is accented nicely by Patricia M. Nichol’s lighting and Valerie Marcus Ramshur’s aesthetically and historically pleasing costumes. Combined with Daisy Walker’s natural direction, a sturdy cast of eight and Gillian Lane-Plescia’s formidable dialect coaching, A Splintered Soul has just the right balance of showmanship and emphasis on Brook’s heady language.

A Splintered Soul deftly presents the complicated post-War Jewish world that, on many levels, still exists today. In his Author’s Notes, Brooks expresses his hope that this play may contribute to perpetuating the discussion and memory of the Holocaust as first-hand experiences disappear. This admirable goal, at least as this production continues its run and serves as a thoughtful conversation piece, is certainly being achieved.