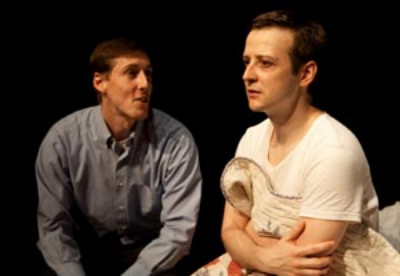 Theatre for the New City is currently showing four plays by veteran playwright Mario Fratti collectively titled Quartet. Fratti is the author of myriad works, most famously Six Passionate Women which was then adapted to the popular musical Nine. Fratti’s works have been translated into 19 languages and performed all over the world; this is his third collaboration with Theatre for the New City.

Quartet is directed by actor Stephen Morrow, whose work has led to associations with Norman Mailer and Arthur Miller. The four scrips are brought to life by a troupe of indy actors including another charming turn by Jennifer Laine Williams, a hilarious performance by Dennis Wit, and a secondary role made leading by the gusto and good looks of Michael Sirow.

Quartet is billed as “four gay-themed plays,” but as the fourth doesn’t actual have any LGBT characters or issues, I would say the common thread is instead sex. There is also a recurring motif to have a twist/“aha!” moment, which is somewhat neutralized for the later performances if the audience recognizes the pattern.

The first play, “Actors,” begins after the opening night of a new play starring David (Kenneth W. Ziegler). David’s former professor Bill (Wayne Maugans) and Bill’s daughter Ethel (Sarah Doe Osborne), who is now David’s girlfriend, debate the nature of her love for David and whether or not she can infer things about David’s character from his brutal performance on the stage. Her father is encouraging, though, and guides Ethel to trust his more experienced opinion.

In “A.I.D.S.” the very ill Otto (Paul Caiola) and his lover Evan (Jason Beaubien) discuss the nature of the AIDS crisis within the microcosm of Otto’s hospital wing and their own circle of affected friends. It is revealed that Evan has been approached by the hospital and given a very difficult choice.

“Dina and Alba” finds post-coital lesbians Dina (Jennifer Laine Williams) and Alba (Melanie Rose Wilson) discussing depression, honesty, and past lovers compared to the present. Dina proposes that when you love someone, you are willing to make a sacrifice for them.

The night rounds out with “Piggy Bank,” an amusing episode between a prostitute called She (Victoria Watson) and her “decent dad” type John dubbed He (Dennis Wit). She appears to be a very generous and loving prostitute, meanwhile she has The Man (Michael Sirow) stashed in the back.

As a whole, the plays all hinge on very interesting dilemmas or issues. I would infer that the idea or concept came first, and the scene grew up around it. And as such, Quartet adds up to a diverse evening spanning a wide array of relations, problems, and possibilities. The production reminds me of a studio series. The props, etc. seem like they came from stock, and the values are workshop-ish, relying heavily on lighting by Alexander Bartenieff. That being said, Mark Marcante’s set (executed by artists Lytza Colon and David “Zen” Mansley) is a fabulous sketch of something grand and rich. Somehow varied furniture and looks are mixed so that specific pieces can be isolated for one play, but all still coheres as a single set on the larger scale.

I also got the impression of an abbreviated rehearsal process. The actors all have a lot of great ideas they are working with, and they have been given tasks and actions to do on the stage, but it seems like they aren’t done exploring. Actors had trouble connecting sometimes because the words didn't seem completely comfortable yet. And there are tasks the actors clearly had been told to complete (balling things up and other stage business) which felt interrupted and then abandoned because these actions hadn’t been fully integrated into the performance or objective.

Quartet also suffered technical difficulties. The night I saw it, the show specifically overcame a flickering light and a few odd cues. Also, in that space, you can hear people walking backstage as well as the buttons in the booth. To the credit of the cast, though, no actor ever let any of this distract him/her.

Quartet is a nice smattering of somewhat jaded relationship shorts with twist endings. The actors are charming, and the set is exciting.

(Quartet plays at Theatre for the New City, 155 First Avenue at 10th street, through June 19, 2011. Performances are Thursdays, Fridays, and Saturdays at 8PM and Sundays at 3PM. Tickets are $15 or $10 for students and seniors and can be purchased by calling 212.254.1109 or at www.theatreforthenewcity.net.)