By Tennessee Williams; Directed by Antony Marsellis
Produced by Cause Celebre 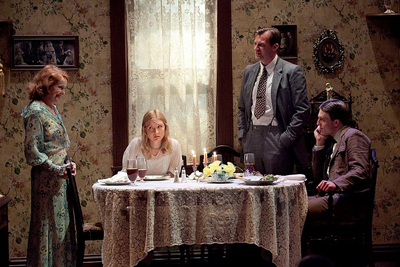 BOTTOM LINE: A slight one act precursor to The Glass Menagerie, well performed and directed, but likey more of interest to Tennessee Williams scholars, rather than to the general theatergoing public.

After more than sixty years, The Pretty Trap, Tennessee Williams’ one act precursor to his much better known autobiographical masterpiece, The Glass Menagerie, is only now having its New York premiere at Theatre Row’s Acorn Theatre. One’s inclination is to say “Well, it’s about time,” but that really would be overstating the case. Not that this very well done production by Cause Celebre isn’t likely to prove of great interest to literary historians in general and Williams scholars in particular; it surely will. But for the typical theatregoer, more interested in being entertained than in learning about a play’s evolutionary development, not so much.

The Pretty Trap was subtitled “A Comedy in One Act” by Williams but it really isn’t very funny (except, perhaps, by comparison to the truly depressing The Glass Menagerie). It does have a happy ending, but this doesn't necessarily make it a better work but merely a shallower one.

The director and the entire cast (especially Houghton) do a first rate job with the material they’ve been given but, notwithstanding that, the play itself, running under 50 minutes, is slight.  Indeed, it really is little more than the germ of an idea for The Glass Menagerie, the exceptional work that succeeded it.