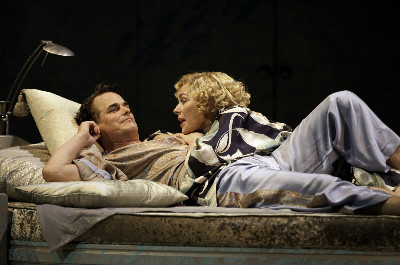 BOTTOM LINE: Private Lives tells a simple story with minimal character development, yet evokes plenty of laughter due to talented performers able to do justice to every one of Noel Coward’s jokes.

Predicting which plays will stand the test of time and which will die out with their era is not always foreseeable. The farcical romantic comedy Private Lives is certainly a play that has endured since premiering in 1930, having been revived for over eighty years, turned into a film, and having once featured Elizabeth Taylor in a starring role. The plot might be simple, but playwright Noel Coward was a man ahead of his time. The appeal of the play with contemporary audiences can perhaps be credited to the fact that main character Amanda bears a strong resemblance to today’s women. Despite existing in an era in which women had few options professionally and little sexual independence, Amanda is financially independent and able to make her own romantic choices without worrying about financial support or social taboos. Amanda is truly anachronistic; perhaps this makes her a heroine with whom women of the 21st century can identify.

Shortly after ending a tumultuous marriage to her ex-husband Elyot (Paul Gross), Amanda (Kim Cattrall) finds herself a more calming spouse, as does Elyot. As fate would have it they both choose to have their honeymoon in Deauville France, staying in the same hotel in neighboring hotel rooms that share a balcony.

The two spot each other and immediately try to convince their spouses to flee the hotel with them and relocate to Paris. Their beloveds both stubbornly balk, leading to bitter disagreements. The two find themselves alone on the balcony avoiding their angry spouses and while commiserating the sparks between them begin smoldering once again. Impulsively the two flee to Amanda’s Paris apartment, sending porters up for their luggage so as to not have to deliver parting words to their new spouses.

We meet the pair again a few days later entwined in their Parisian love nest. As their lust has now been fulfilled, the two soon come back to the point that triggered their breakup, with them engaging in verbal sparring. Although the momentum lags in a couple of places, for the most part the energy level remains high, with the argument growing greater with every glass of brandy they imbibe, until the two begin to set about destroying the ornate apartment in the wake of their fight. Meanwhile they sit on edge, fearing that every telephone ring might be their abandoned spouses, demanding an answer for having been pushed aside so quickly.

The appeal of this production can also be credited to strong performances from both Gross (known for a number of roles on Canadian television including Due South and Slings and Arrows) and Kim Cattrall (of Sex and the City fame). Their nuanced performances add depth and dimension to characters that would be one dimensional in lesser hands. The two also have convincing chemistry, slipping quickly from desire and affection to anger and resentment. Director Richard Eyre makes the most of the script, enabling Gross and Cattrall to milk every laugh from every sardonic line under his guidance. Cattrall’s performance as Amanda shows a greater range than she showed during her long TV run as Samantha. While Samantha seemed to posess ceaseless, steamrolling confidence, Cattrall shows more vulnerability and insecurity as Amanda, a woman who takes risks but also exposes her fear and trepidation. (While Cattrall has not been on a Broadway stage in 25 years, she performed in Private Lives in London, following a number of other theatrical roles across the pond.)

The set for the play, designed by Rob Howell, also does much to augment a simple story and only somewhat developed characters. The opening scene’s hotel balcony realistically evokes the French oceanside, whereas Amanda’s apartment is visually sumptuous with curves and an aquatic feel that is evoked by a three tiered aquarium lit by blue lights. The visually pleasing aspects, combined with the well-timed comedic acting, does much to enhance a storyline that could feel sparse otherwise.