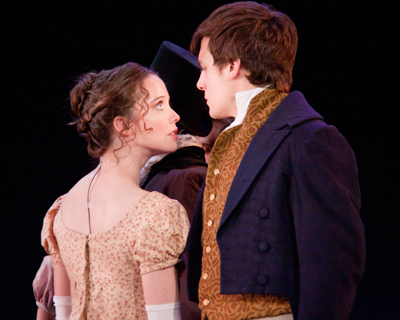 BOTTOM LINE: A solid musical adaptation of a classic piece of literature.

It's clear to see why Jane Austen's Pride and Prejudice has quickly sold out its limited NYMF run at The Signature Theatre. In a festival where many works are being thrust in front of the eyes of New York audiences for the first time and are asked to bring their A-game, Pride and Prejudice presents itself as a piece of polished theatre. This musical has already had several productions out of town and even brings most of the cast from these productions to strut their talents here in New York City. So it’s no wonder that what the audience sees is a smartly crafted and flushed out piece of musical theatre.

Playwrights Lindsay Warren Baker and Amanda Jacobs have taken Jane Austen's classic tale and put a slightly interesting spin on it. Instead of merely telling the story of Pride and Prejudice, they have chosen to have Jane Austen (brought to life with great complexity and nuance by Broadway veteran Donna Lynne Champlin) be an ever-present narrator of sorts who is busy crafting the tale in front of our eyes as she tries to create a follow up hit to her smash success Sense and Sensibility. It is a very interesting convention that allows us to look at the story's characters in a very different way.

While the musical's score is beautiful and masterfully sung by the two leads, Patricia Noonan and Doug Carpenter, I feel that some of the songs hinder the great storytelling that Baker and Jacobs have created. At times it seemed like a song existed just for the sake of there being a song when I would have much preferred the show to rely on the strength of the book. Case in point: the songs sung by the two parents come across as a little “one note” and might have been summed up in a short scene rather than an entire song that doesn’t really propel the plot forward. A great example of a truly remarkable musical moment is the skillfully understated performance of Jennifer Waiser as Charlotte Lucas who delivers a touching and heartfelt rendition of “Not Romantic,” in which she muses on the practicalities of love versus marriage. Although it is brief, it stood out as one of the strongest and most memorable moments of the entire show.

The fact that I can be this picky about a show at NYMF, which showcases musicals at various stages of development, is a testament to the strength of Pride and Prejudice. Don’t get me wrong, it is a solid piece of musical theatre that will thrill fans of Jane Austen to the very core. A huge part of that success is due to the masterful direction of Igor Goldin who manages a cast of 20 with a great sense of ease and finesse. The period choreography by Jeffry Denman also helps create the world of Jane Austen society quite nicely. And one would be remiss to not single out the breakout comedic performances of Matthew Schneider as wealthy, fabulous Mr. Collins and Jacque Carnahan as Lydia Bennet, the saucy younger daughter.

If you’re a fan of sweeping romantic musicals and/or Jane Austen, you will flip for Pride and Prejudice. While it’s not a perfect piece just yet, it is well on its way to greatness. One small suggestion from this reviewer: perhaps a title change would serve the piece well. I would think that something along the lines of Pride and Prejudice: According to Jane Austen or According to Jane: A Tale of Pride and Prejudice might let the audience know that they are not seeing a straightforward telling of Jane Austen’s classic work and might expand their perspective. No matter what you call it, Pride and Prejudice has won over critics and audience members in New York and it is clear to see why. With only one sold-out performance left, if you don’t already have your tickets you'll likely miss the chance to see this production, but I’m sure you’ll see countless regional productions popping all over the country. And who knows? With such success at NYMF, Ms. Austen might have life yet here in New York.