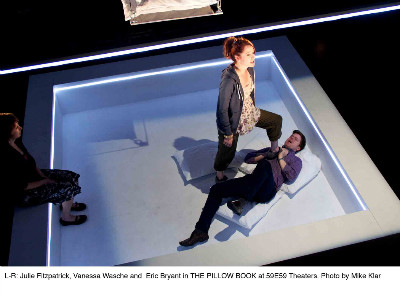 BOTTOM LINE: An innovative and lively work that explores the dynamics of a married couple’s fragile relationship through differing scenarios that are not all linearly connected.

The title to Firework Theatre’s new production stems from ancient Japanese writer Sei Shōnagon's writing, also titled Pillow Book, which focuses on examining life through a fluid collection of experiences that illuminate a greater overall idea, rather than one singular linear story. Playwright Anna Moench derived inspiration for her play’s style of disjointed scenes this way, and the fact that the play’s only props consist almost solely of piles of fluffy white pillows is a clever tie-in.

The Pillow Book opens with the characters sitting in a modular white ring lit by white fluorescent lights and lined with piles of white pillows. Above them floats another pillow replete with its own halo of fluorescence. There is a near blinding sea of immaculate whiteness, giving full focus to the colors and textures of the characters’ clothing. The play consists of three characters: Deborah (Vanessa Wasche), Deb (Julie Fitzpatrick), and John (Eric Bryant). Deborah seems to be a less inhibited version of Deb, a younger and more idealistic version of the same woman. Many of the scenes involving Deborah seem to be that of an idealistic young couple, still full of the excitement and freshness of their relationship whereas the scenes with Deb show the couple in more somber, older years when the freshness has worn off and the reality of their lives has begun to set in. The beginning of the play introduces us to the central crisis that threads through much of the play’s other scenes: John is resolute that it is time for them to have a child and Deb is disgusted by the idea, repulsed by the toll that a pregnancy will take upon her body and the sacrifices she will have to make. The argument is undercut with small details of domesticity that give the argument a feeling of realism, such as John, much to Deb’s disgust, beginning to lick at a shared pint of sorbet while she is only feet away fetching spoons.

Later we see Deborah appear as John’s wife. Deborah is an overworked doctor, but she is finally able to achieve one night of rekindled chemistry with her husband after becoming much to drunk at her hospital’s benefit party. Deborah describes in sensual, languid detail the sensation of her husband’s touch becoming new to her again. However, in the morning, the magic of the night before is gone as they both realize they have become infested with bedbugs and will have to tear apart the very bed in which they felt such a magical union the night before. (Given the torturous and seemingly insurmountable problem of bed bugs in New York City, it’s surprising such a plot twist does not appear more often in theater.)

Intercut between the stories of differing versions of John and Deborah/Deb’s marriage are storyline in which either Deborah and John become injured and must be physically taken care of by the other. John breaks his leg while skiing, and Deborah goes temporarily blind in the middle of the Serengeti when an overly anxious John accidentally sprays pepper spray in her face. These scenes serve to illuminate the marriage scenes by exploring the interdependency of marriage and relationships.

In one particularly compelling scene, in which Vanessa Wache gives a breathtaking performance, John is a TSA agent and Deborah is the passenger who is attempting to sneak military grade pepper spray into Africa. She tells John why she needs the pepper spray: “I have it because I might get attacked and I will kill the bastard who does it, but only after I torture him until he shrieks for mercy.” Even though John and Deborah are supposed to be strangers in the scene, the circumstances float away and the emotions the two share in earlier scenes rise forth.

The Pillow Book, overall, is a riveting, insightful and innovative work. The excellent performances help some of the zanier scenes come off as more convincing; they pull off a feeling of interconnectivity to the piece as a whole, despite its lack of linearity.