Student rush tickets are $15 and can be purchased at the box office beginning at 1PM day of performance with valid student ID. Subject to availability. Cash only. 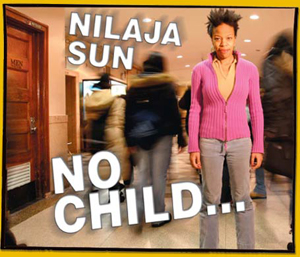 BOTTOM LINE: With a powerhouse performance by Nilaja Sun, No Child is an intense and theatrically satisfying production.

From the minute the lights go down and the school bell rings, Nilaja Sun enthralls her audience. Sun’s flexible face, specificity of voices, and detailed characterizations motor through the quick 60+ minutes that make up No Child. This award-winning solo show is back in New York after a successful 2006 run and a subsequent (inter)national tour. And it’s no wonder the show has been so highly acclaimed: Sun is freaking brilliant.

No Child looks at a rough high school in the Bronx, and the students and faculty who comprise the community. Sun plays nearly a dozen of these characters, including herself; she is at the school as a teaching artist under a grant to facilitate the production of a play with a particularly challenging sophomore class. With all hope and good faith, Sun optimistically embarks on the task, only to learn it won’t be nearly as easy to engage her students as she previously thought.

From the class’s timid first-time teacher, to the students themselves, to the assertive principal, to the elderly janitor who serves as the story’s narrator, Sun assumes a wide smattering of personalities, and transitions between them instantaneously. The ease with which she embodies the characters and lets the story unfold is remarkable. And her energy never waivers. In reality, Sun is an adult African American woman, but in No Child she puts on these other individuals with such truthfulness that her own characteristics become invisible. And these transformations occur from physicality and voice alone as there are no costume changes or props to speak of.

Aside from a wonderful performance worth the price of admission alone, No Child also offers a meaningful story that sheds light on America’s education system and its many, many issues, especially present in a low-income community. In a particularly funny and poignant moment, Sun -– as herself -– admits that as a teaching artist there’s some advantage to a placement in a rich community where the only problems she’d face would be soccer moms, bulimia, and questions about how she washes her hair. No Child's narrative isn’t entirely unique or surprising -– in stories like this, the overwhelmed yet inspirational educator always triumphs and inevitably young lives are changed. But No Child’s harsh inspection of the nation’s academic pitfalls is certainly something worth exploration and exposure. Sun hits hard at the heart of the issue and champions for both arts education and the need for more educational attention in our poorest communities.

Director Hal Brooks gives Sun room to glide from one persona to the next, while clearly distinguishing the individuals. It is to his credit that the plot is consistently clear and the story constantly engaging. Moving, funny and wholly entertaining, No Child is a show worth catching on this return engagement, particularly if you haven't seen it previously.

(No Child plays through August 14, 2011 at the Barrow Street Theatre, 27 Barrow Street at 7th Avenue South. Performances from June 28th through the end of the run are Tuesdays through Saturdays at 7:30PM and Sundays at 2:30PM. Tickets are $40 and are available at smarttix.com or by calling 212.868.4444. Student tickets are $15 and are available at the box office the day of the performance. For more show info visit barrowstreettheatre.com.)