Next Thing You Know

By Ryan Cunningham and Joshua Salzman; Directed by Terry Berliner 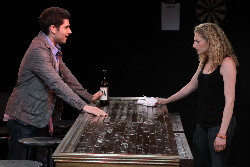 Adam Kantor (left) and Lauren Molina in Next Thing You Know. Photo by Greg Solomon.

Next Thing You Know, the new musical having its New York debut at CAP21 this month, is in many ways a story you’ve seen before, whether on stage, on TV or on the big screen. The show is a little RENT and a little Singles, a little The Real World and a good helping of Friends, and there’s definitely a hint of Sex and the City. Now, this combination doesn’t necessarily make for a bad show and Next Thing You Know is actually infused with a good deal of talent. However, in order to enjoy it, you must not expect a story that blows your mind with originality or profound insights into the human experience.

We are introduced to four New Yorkers in their late twenties who all find themselves at the “Sullivan Street Tavern” on a regular basis. The central character is a curly-haired, would-be actress named Waverly (Lauren Molina). Waverly tends bar at the tavern with her best friend Lisa (Lauren Blackman), an ultra-femme lesbian singer/songwriter who is wishing to be swept away to Los Angeles by the woman of her dreams, but is beginning to think she needs to do the sweeping herself. Waverly’s boyfriend Darren (Adam Kantor) is so busy working at an office by day and pursuing his dream of playwriting by night that he isn’t giving her the attention she thinks she deserves. Just to make things appropriately complicated, Darren’s office mate Luke (Heath Calvert), a tall suave lady-killer (who, in modern vernacular, could easily be called a “douchebag”) is making moves on Waverly without realizing he knows the boyfriend she often complains about.

Next Thing You Know is an early-career musical for the writers Ryan Cunningham (book and lyrics) and Joshua Salzman (music), and the first they have written after graduating from NYU Tisch. The writing is good, and at times quite humorous, but not always memorable. This is especially apparent with the songs, which don't really lead to inadvertent humming the following day (though one song titled “How About You?” stands out among the rest and displays Cunningham and Salzman’s potential to come up with unexpected rhythms and nuanced, rapid-fire lyrics). The same goes for the characters, who are largely flat and stererotypical, however the writers' potential shines through in the second half of the play as the three of four characters grow in complexity.

CAP21’s uniquely designed black box theatre gives the director an interesting space with many options -- this show is roughly in the round. Aside from my proximity to the live band, though, I found that the experience would not have been much different if it had been staged more traditionally. This isn’t a big fault, but it does indicate unused potential, which is true of the design in other ways, too. The costumes come across as a one-stop shop at Macy’s and give the characters a flat, ultra-clean appearance. There are also some conspicuous oversights with the props, the most glaring of which is the “whisky” that is served at the bar and is clear in color and obviously just water. It’s a simple error and could easily be fixed; as is, it compromises the believability of the world created on the stage.

While Next Thing You Know could be better in many ways, it is still a showcase of talented and professional performers, boasting several Broadway credits. Calvert stands out as Luke, bringing to life the white collar womanizer who is still a little bit vulnerable. Blackman, who beams with a calm and confident eneregy, is the most fun to watch. Though her character is the flattest, she also has the most mature perspective and is likely to gain favor with many people in the audience. The live five-piece band is also a solid element as they flawlessly deliver the score.

Next Thing You Know attempts to encapsulate the questions that people often struggle with in their late twenties: What am I going to do for the rest of my life? Who am I going to spend it with? Where am I going to live? In many ways, the struggle that the characters are going through is relatable, because most people who go to college find themselves more “in-between” than expected in the years after graduation. However, compared to a show like RENT, whose characters are dealing with poverty, eviction, terminal illness -- all struggles of survival -- the problems that these characters deal with seem rather lightweight. Perhaps the writers didn’t want to deal with those bigger issues, but I found it relatively hard to sympathize with Waverly’s big stressful choice: whether to continue working her day job and waiting for her big break as an actress or to take a full-time job that will set her toward being a lawyer, like her parents. Either way, in all the ways that really matter, she’s going to be fine.

Although I found myself a bit irritated by the stereotypes of late twenty-somethings and particularly of New Yorkers in that age bracket, Next Thing You Know may appeal to a younger demographic. Younger people (I’d say age 16-24) who are yet to reach the age of these characters are likely to find more value and romance in their struggles and less fault with the simplified portrayal.