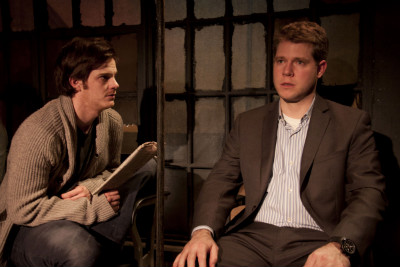 Navy Pier is the type of show that could strike panic in the audience before it even starts. Coming into the 50-seat Studio Theatre, you are greeted by the music of Sigur Rós--atmospheric, yes, but so abstract that the lyrics are sung in an invented language (“Hopelandic” is what the band from Iceland calls it). Even more indicative of a potentially overly-intellectual theatre experience is what is on stage: four chairs and nothing else. All signs are in place for a 90-minute show that consists of nothing but talking. And indeed, this is precisely what Navy Pier is.

By sacrificing many of the elements that people seek out in theatre (props, scene changes, actors actually moving around on stage) in favor of a format that looks more like a community board meeting, a show like this risks being boring or tedious. However, InProximity’s current production of Navy Pier sparks with more than enough energy to keep the audience listening to every line.

The story is a kind of joint-effort confessional told by four interconnected characters. Martin (Josh Clayton) is the nucleus of the story, though his prominence over the others is slight. Martin is a mess of a fiction writer, sensitive and self-sacrificing and, despite his own immense talent, he grovels over his smug and confident college friend Kurt (Michael Poignand). The other two characters are Martin’s past and present girlfriends. In college, Martin dated Iris (Jolie Curtsinger), a sharp and straightforward painter who had also fallen under Kurt’s spell. Liv (Laurie Schaefer) is the warm and generous bartender Martin met in San Francisco (after he fled Chicago) who must deal with his emotional shellshock after a painful betrayal.

The characters take turns recounting their shared past, laying the brickwork for a complex story that the audience comes to understand from all sides. John Corwin’s writing is exceptional. He has created four nuanced characters with unique motivations and natural voices. At the same time, each character operates as a puzzle piece within the group. There is a palpable sense of balance among and within the characters. Take for example Martin, who is a brooding writer and whose tortured artist archetype is countered by Iris, a painter who possesses a no-nonsense attitude that is more typical of someone who works in finance. There is also an enchanting rhythm to the script, which weaves between the characters and loops through past points in time, resulting in an organic sense of fluidity.

Furthermore, the play’s delicate balance is kept in place by the four performers, each bringing a character to life without overshadowing the rest of the cast. Clayton brings a perfect sense of derangement to Martin, his hair getting more and more mussed and his eyes reddening as the play moves forward. Poignand’s Kurt is not-quite-heartless and his charmer smiles and cocky pick-up lines are disgustingly effective. Curtsinger infuses Iris with a delicately false warmheartedness, and Schaefer’s Liv is smart, sweet, and sensitive.

The show’s minimal design is effective too. The bill does not list a costume designer, but whoever outfitted the cast was perfectly in tune with each character. Martin wears a cardigan sweater (think Kurt Cobain) and Converse shoes. Iris wears a billowy top and skinny jeans that scream “Macy’s” and helps complete her neo-archetype: the gentrified artist. Behind the four chairs on stage is a grimy paneled window with a barely visible cityscape and gradually changing light on the other side. James J. Fenton's set calls to mind a post-industrial loft space and gives a vague but urban setting to this confession that, in reality, would never happen (which is precisely why it is so interesting).

With its focus on strong writing and great acting, Navy Pier is really a character piece, successfully developing and exploring what makes each unique person tick. The plot is, at times, a little too tidy to be believable; the story, though, is really just a secondary necessity that gives the characters something to talk about--a means through which they reveal who they are. Ultimately, the play shows that every person is hopelessly unique and therefore every relationship bound to be fraught with misunderstanding. Navy Pier is like a swatch of the fabric of humanity, and what a complex and contradictory pattern it is!